The Ends Of The Justice Society 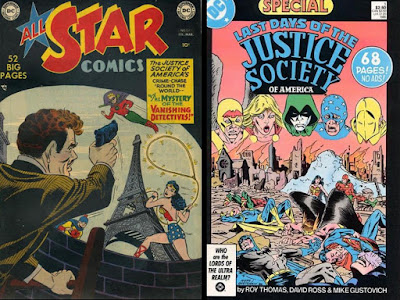 Usually things only get one end, but not so with the Justice Society of America.


Here's a look back at a few issues of DC Comics' oldest super-hero groups....and a few times where they had "final endings"!


The Mystery Of The Vanishing Detectives 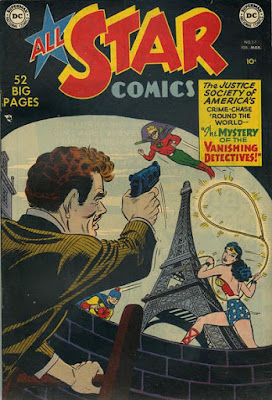 First up is All-Star Comics #57 (February-March, 1951)  by John Broome, Frank Giacoia, Arthur Peddy (with a cover by Arthur Peddy and Bernard Sachs).

The JSA gather four famous detectives in Civic City to help them solve a case to find out who is the mysterious Key....and they did, but they had no idea that the JSA would be the vanishing detectives, as Flash, Green Lantern, Hawkman, Atom, Dr. Mid-Nite, Wonder Woman and Black Canary had this as their last published adventure of the team (with the next issue of the series changed to All-Star Western....and only Wonder Woman continued on in her own title, as well in Sensation Comics, with no explanation as to where the team was or what had happened to them).

The Defeat Of The Justice Society 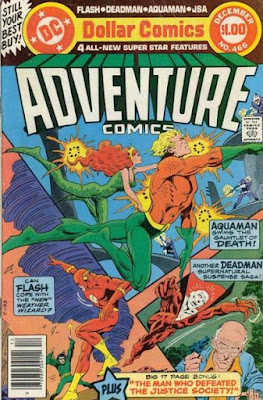 Next ending is Adventure Comics #466 (November-December, 1979) by Paul Levitz and Joe Staton (and they didn't even make the cover of the issue, which was by Jim Aparo).

This issue was a double ending, as new member (and Batman's daughter) the Huntress, explained what happened to the original team in the 1950s to Power Girl.  How they were approached by a man claiming to represent the U.S. government, and showed them a satellite they could use as their headquarters, but attacked the team instead.  The JSA found they were not really working with the U.S.A., but, in attempting to explain that, were forced out of functioning as the government wanted them to reveal their secret identities (which they were loathe to do).   This issue also marked the last solo JSA story of the 1970s (though the team would still make the annual Crisis with their Earth-1 friends, the Justice League of America).

Last Days Of The Justice Society 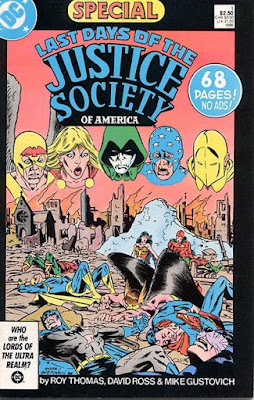 Last is the aptly titled Last Days Of The Justice Society Special #1 (1986) by Roy and Dann Thomas, David Ross and Mike Gustovich (with cover by Ross and Gustovich).

The team gathered to deal with their losses after the Crisis On Infinite Earths....and found that they also lost soon after World War II?

How could that be possible?

Some leftover energy from Adolf Hitler, powering the Spear of Destiny was doing to doom the newly formed DC Universe....if the remaining members of the JSA didn't band together to fight to stop the end of the universe...or, Ragnarok as it had been called in the days of the Asgardians (which is what Hitler had summoned up in the 1940s as World War II drew to a close). 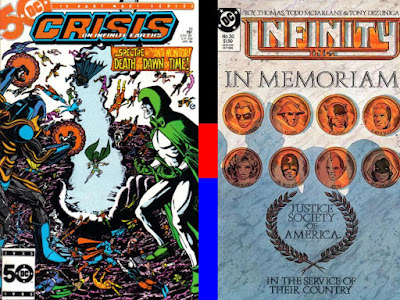 The JSA had to stay in an extra-dimensional land, continuing to stave off an ancient end, fighting the fire-demon Surtur, except for Spectre, Dr. Fate, Power Girl and the Star-Spangled Kid.  While the Kid kept up with Infinity, Inc. (as Skyman), Dr. Fate, then Power Girl, joined the Justice League...
...there was no JSA for a time 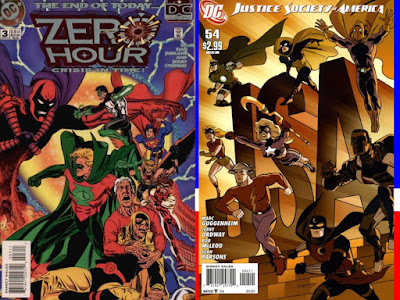 The team returned from that armageddon, older and wiser, suffered more setbacks and changes, but continued to return....as they shall again!