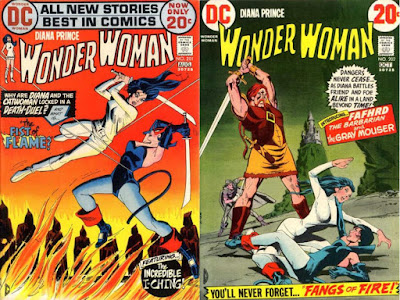 To be fair, the seventies were an odd time, and, as you can see by these two Wonder Woman covers, both Diana Prince and Selina Kyle (Catwoman) had costumes that they usually weren't known for wearing....but, these two issues were a monumental occasion....that being the first time that Wonder Woman and Catwoman ever met!

The Fist Of Flame 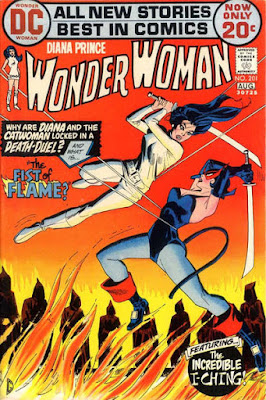 First up is Wonder Woman #201 (July-August, 1972) by Denny O'Neil and Dick Giordano (who also did the cover), starting our tale.

Diana Prince, the currently depowered Wonder Woman, and her friend, blind martial art master I-Ching, go looking for detective Jonny Double, to find him missing, and are attacked.  After fending them off, Diana is instructed to get a ruby called "The Fist Of Flame" in a hidden village in Tibet.  Diana and I-Ching go there, and as Diana is about to take the ruby, ends up fending off Catwoman.   Catwoman is also there to take the ruby, but both get caught by the temple guards, and are forced to fight to the death.  Diana works with Catwoman to save both their lives, and with I-Ching (who finds out from Catwoman it is his missing daughter, Lu San, who sent her there), they escape with the ruby, but, then, in the cave, the world spins the trio find themselves face to face with barbarians in another dimension.....a perfect place to end the issue! 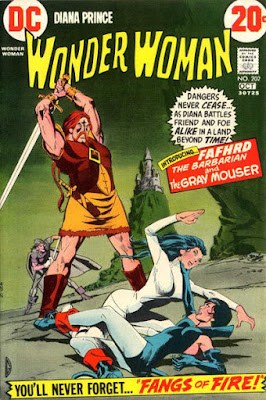 In Wonder Woman #202 (September-October, 1972) by Samuel R. Delany and Dick Giordano, Diana and friends find out "The Fist of Flame" teleported the trio to the land of Nehwon, and the men they met are barbarian thieves, Fafhrd and the Grey Mouser.

These two men were looking for "The Eye Of The Ocean", a jewel Lu San (who was holding Jonny Double captive) was using to build a dimensional breach to the land of Nehwon, so she could loot its treasures.  The five go to face the sorcerer Gawron, who was protecting the dimensional energy transfer matrix machine in Nehwon.  I-Ching ends up holding both gems, and brings Lu Wan, her men and Jonny to Nehwon.  In the confusion, I-Ching opens a portal to Earth, with the five and Jonny going home, and I-Ching taking "The Fist Of Flame" and the Grey Mouser taking "The Eye Of The Ocean" as they go through, leaving Lu San and her men trapped with Gawron.

In Jonny Double's office (where I-Ching transported them back to), Fafhrd and the Grey Mouser decide they do not like this world, and end up transported back to Nehwon... 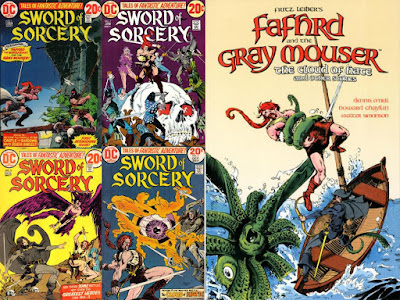 ...into their own adventures in DC's new at the time Sword Of Sorcery comic book adapting stories of Fritz Leiber's duo for five issues, with Denny O'Neil writing the stories based on Leiber's work, and art by Howard Chaykin, assisted by the teams of Crusty Bunkers, which included Neal Adams, Bernie Wrightson, Alan Weiss, Rich Buckler, Joe Rubenstein, Rick Bryant, Walt Simonson, Al Milgrom and more, with this series being reprinted by Dark Horse in June of 2016 under the title of Fritz Lieber's Fafhrd and the Grey Mouser: Cloud Of Hate and Other Stories. 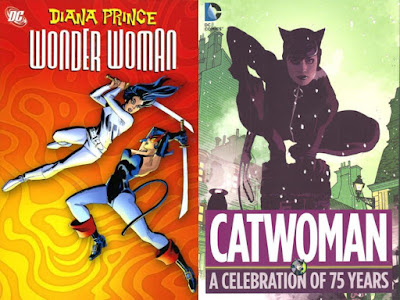 The Wonder Woman stories have been reprinted as well, in the fourth volume of Diana Prince: Wonder Woman in 2009 (and soon in the Wonder Woman: Diana Prince Omnibus) as well as in Catwoman: A Celebration of 75 Years from 2015 so you can read the full story of these tales on your own!
Posted by Dave's Not Here Comic Blog at 4:11 AM

New comments are not allowed.