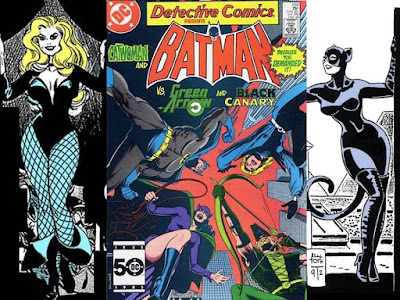 Black Canary and Catwoman were two of DC's sexiest woman in costumes, but, before the Crisis on Infinite Earths, they really hadn't run into each other....but once.

There's a little bit of a story before that, when they met with Batman and Green Arrow in tow, but, there was one meeting before that....

It Takes Two Wings To Fly 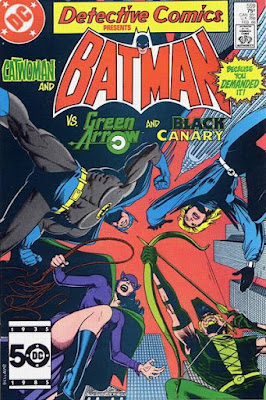 Detective Comics #559 (February, 1986) by Doug Moench, Gene Colan and Bob Smith (and cover by Brian Bolland), takes place after the red skies (and other problems) of the Crisis had gone away, but still counts as the Earth-1 version of Black Canary and Catwoman.

The issue starts with Green Arrow stopping Batman from catching a crook in Gotham (the two met repeatedly before), and the two nearly coming to blows before Black Canary stops them, eventually explaining that the man was wrongly accused by a big chemical manufacturer with divisions in Gotham and Star City. The two bicker constantly, allowing their quarry to escape and head back to Star City.  Batman, taking Catwoman along with him (as Bruce Wayne and Selina Kyle).  Catwoman uses her implied criminal past to get an appointment with the crooked owner of the chemical plant, and Batman, Green Arrow and Black Canary (with a little help from Catwoman) stop them, and while Batman and Green Arrow argue, the ladies go out for coffee...

But, this doesn't give us the first time Black Canary and Catwoman met...that follows!

The Canary And The Cat 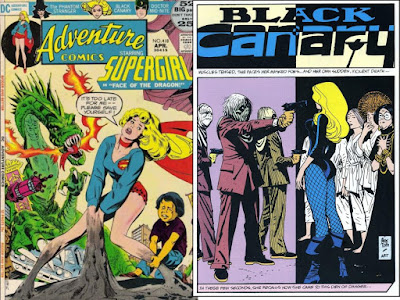 Adventure Comics #418 and Adventure Comics #419 (April and May, 1972) feature a two-parter focusing on Black Canary, by Denny O'Neil and Alex Toth....and what an adventure it was, so beautifully rendered by Alex Toth!  There is a bit of mystery in the issue, and just the title above (given to the two parts of the story in the Black Canary Archives, where it was reprinted) kind of gives it away..... 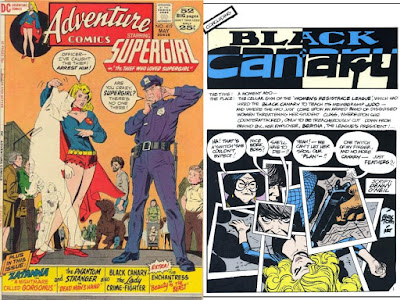 The story begins with Dinah Laurel Lance wondering how she had ended up at this point in her life, looking for a job, and thinking she might find one teaching judo at the Women's Resistance League for Bertha Kane.  At least she does, until she's attacked by thugs....and stopped by Bertha!  Bertha's school is a front for a criminal mastermind, who wanted them to free her.  Bertha and her school of criminals take Black Canary hostage and go to free her boss, but Black Canary gets free, and stops them just before they get to spring their leader....Catwoman! 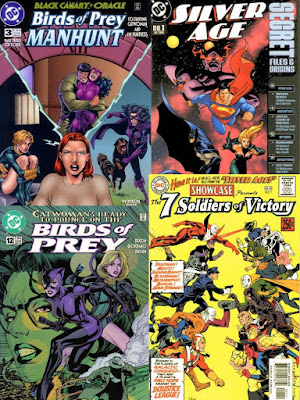 After the Crisis, Black Canary met Catwoman more often, usually thanks to her working with Oracle (the former Batgirl, Barbara Gordon), in the Birds of Prey...

....though there was one flashback story during an event week under the title of the Silver Age, that featured a potential earlier meeting of Black Canary and Catwoman where they switched bodies over the course of the titles of the crossover.