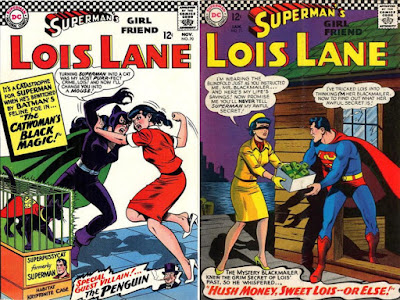 Since Catwoman had disappeared from Batman comics in 1954, it took an investigative reporter (Lois Lane of the Daily Planet) to find her, and feature her in two issues of Superman's Girlfriend, Lois Lane to restart Catwoman's career of crime in the 1960s.

Well, Catwoman being missing for a time was true, there was more to the story, as will be revealed here! 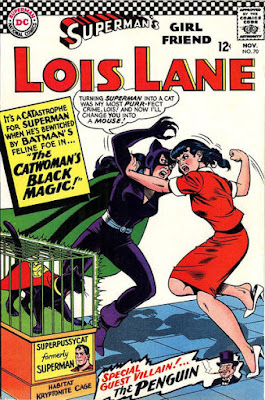 Superman's Girlfriend, Lois Lane #70 (November, 1966)  by Leo Dorfman and Kurt Schaffenberger (who also drew the cover) was where Catwoman returned, oddly, with Lois Lane tracking down the Penguin, who she feels is going to rob a bird sanctuary in Metropolis (guess Penguin decided being beaten by Batman enough times in Gotham was enough, though how would Lois know....).

So, of course, Catwoman shows up, hypnotizes Lois to think she's Catwoman, and has her wait to kill him.  Lois does try, but Superman and Batman take him down, and Superman finds out Lois is Catwoman, then tracks down Catwoman to free Lois.  Catwoman uses her magic wand (???) to turn Superman into a black cat, and cages him in a Kryptonite cage, with Lois coming to fight Catwoman to save him.

Bad Luck For A Black Super-Cat 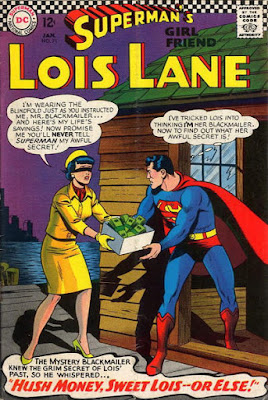 The conclusion to the story was in Superman's Girlfriend, Lois Lane #71 (November, 1966)  by Leo Dorfman and Kurt Schaffenberger (with Kurt drawing the cover referencing the other story in this issue), with Catwoman battling Lois Lane.

During the fight, Lois accidentally triggers Catwoman's Earthquake machine (sigh....) which leads Batman and Robin to her headquarters, where they capture their feline foe.  But, with the magic wand out of power, how is Lois to return Superman to his natural form?  Well, she gets some help from Lana Lang, who uses a magic item her archeologist father found, of course...

...the wonderfully fun camp of the Silver Age, but a first meeting between Catwoman and Lois Lane! 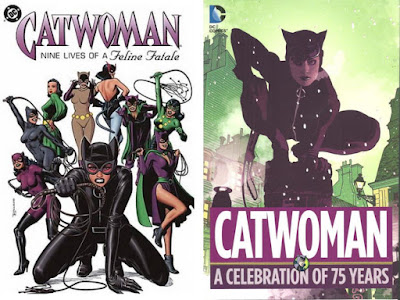 Better still, if you see all of these issues, they have been reprinted, once in Catwoman: Nine Lives Of A Feline Fatale TPB of 2004, and in Catwoman: A Celebration of 75 Years from 2015, along with many other Catwoman stories in both!
Posted by Dave's Not Here Comic Blog at 4:11 AM