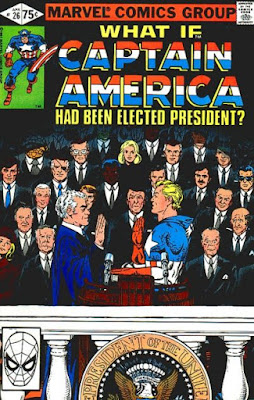 Captain America as President?  That was the basis of the story of What If? #26 (April, 1981), with Captain America running for and successfully becoming the President of the United States in a story by Mike W. Barr, with Roger McKenzie, Don Perlin, Roger Stern and John Byrne all contributing, and art by Herb Trimpe and Mike Esposito....all under a cover by Marie Severin (with Captain America co-creator Jack Kirby swearing in Steve Rogers, with Jimmy Carter and Ronald Reagan in attendance).

Of course, if Captain America takes over the United States, wouldn't that force the Red Skull to get his own country?

The issue also contained a story about an alternate reality Man-Thing, and some history on the Eternals and the Kree (the last two alien races that Jack Kirby had a hand in creating....). 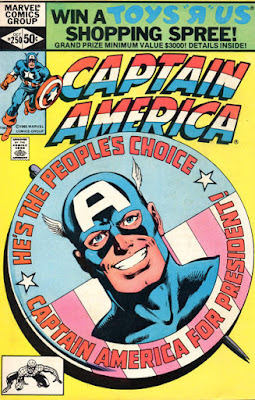 This story was an alternate world version of the Captain America story from Captain America #250 (October, 1980, by Roger Stern, John Byrne and Joe Rubenstein, with plot ideas by Don Perlin and Roger McKenzie), wherein Captain America was approached about running for President as the people's choice.  Cap decided for the good of the country, that his being president would not be good for America.....which the What If? story played out.


How can you judge a President?


How about by what he does while he is President? 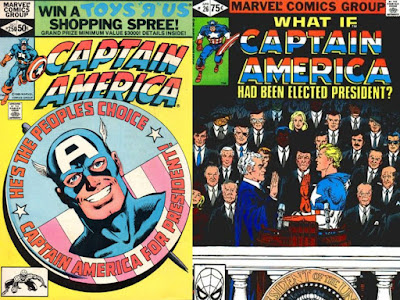 Email ThisBlogThis!Share to TwitterShare to FacebookShare to Pinterest
Labels: Captain America, Marvel Comics, What If