Thank You Very Much Says Elvis To Captain Marvel Jr 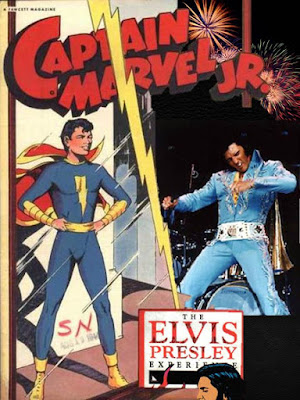 Elvis Presley was a big fan of comics, specifically, those of artist Mac Raboy, and the hero he drew in the 1940s, Captain Marvel, Jr., though it was likely the issues of the later 1940s, drawn by Kurt Schaffenberger, Joe Certa and Bud Thompson that were read by the King.


Elvis even based his hair style on that of his hero, and Elvis' outfits may even look a little like those of old superheroes as well! 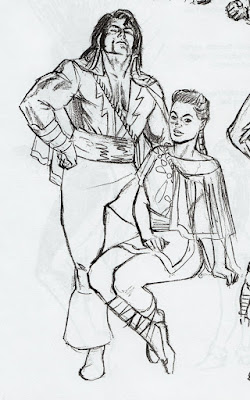 In the 1990s, artist Alex Ross drew upon this fact when he did a series called Kingdom Come, dealing with grown up super-heroes, and turned a grown up Captain Marvel Jr into "King Marvel"...


...with Mary Marvel looking a little like Priscilla Presley, the King's wife, as "Lady Marvel"! 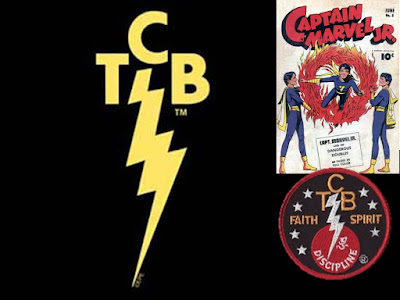 Elvis even had the members of his entourage, the Memphis Mafia, take this oath, and gave them jewelry with the TCB logo (TCB for Taking Care of Business, which also had a lightning bolt with it, and referred not only to Elvis' fondness for Cap. Jr., but to his own devotion to karate, being an 8th level black belt, and a bit of a sense of humor):

More self-respect, more respect for fellow man.
Respect for fellow students and instructors.
Respect for all styles and techniques.
Body conditioning, mental conditioning, meditation for calming and stilling of the mind and body.
Sharpen your skills, increase mental awareness, for all those that might choose a new outlook and personal philosophy.
Freedom from constipation.
TCB technique
All techniques into one.
Elvis Presley 8th
Applying all techniques into one.

The logo being invented by Elvis and Priscilla in the early 1970s, when Captain Marvel was enjoying a revival at DC Comics (bringing along Mary Marvel, and Captain Marvel Jr. and the whole Marvel Family as well, all under the title of Shazam!).


Holy Moley and thank you very much! 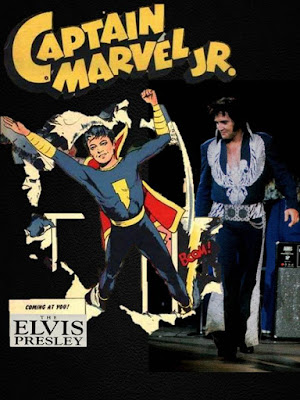 Posted by Dave's Not Here Comic Blog at 4:54 AM