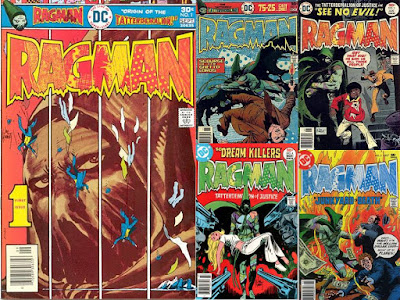 ...who fights for the common man?

Back in the day, in a small neighborhood in Gotham, that was the Ragman, as created by Robert Kanigher and Joe Kubert. 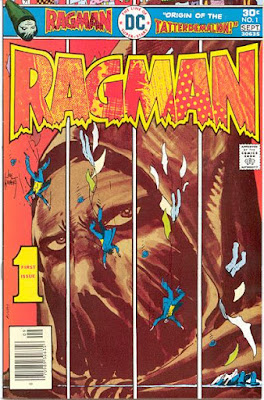 In Ragman #1 (August-September, 1976, by Robert Kanigher and the Redondo Studio, with cover and layouts by Joe Kubert), we meet Rory Regan, a Vietnam veteran who was helping his father run "Rags'n'Tatters" (a second hand store in an unsavory part of Gotham City).  Rory's dad found a large cache of cash, and decided to split it with his 3 older friends (a circus strongman, a world-class acrobat and a heavyweight boxer), though they suspected the money was not obtained legally.  The elder Mr. Regan should have heeded his instincts, as gangsters came to claim the money, shooting down power lines to execute the 4 old men, with Rory showing up as they were drying...trying to save them, he grasped his father's hand, and as they died, the four men passed on their strength and abilities to Rory.  Taking a costume made of rags he planned to use for a costume party, Rory went out to take revenge on the hoods who killed these men in "The Origin Of The Tatterdemalion". 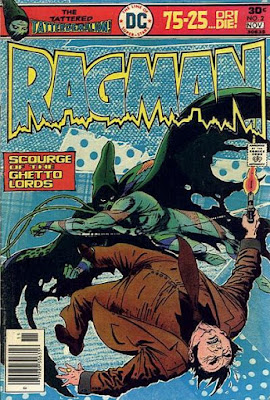 The syndicate comes looking for their cash in Ragman #2 (October-November, 1976, by Kanigher, Kubert and the brothers Frank and Nestor Redondo) with "75-25 Or Die", as life continues for Rory Regan at Rags'n'Tatters (secretly and slowly distributing the mob million among the neighborhood residents).  Rory's journalist girlfriend, Bette Berg, who thinks Rory could do better than to stay in this neighborhood...yet, he won't leave as he feels he's the only one who cares about the people here, and advises her to leave him (which she won't do as she cares about him).

This issue introduces the lady Opal, who is enamored with Ragman, as the criminals attempt to trap Ragman...not knowing of his full abilities and dedication and devotion to keeping his neighborhood safe, and a little bit of luck in knowing exactly where the junk in his neighborhood is. 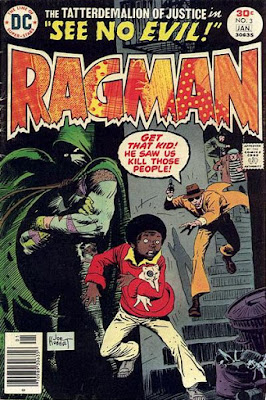 With his third appearance under a stunning Joe Kubert cover, in Ragman #3 (December-January, 1976/1977 by Robert Kanigher, Joe Kubert and the Redondo Studio), the tattered tatterdemalion of Gotham faces off against the gangster Mr. Big and his gang...

...all to save Teddy, a deaf-mute boy who happens to be the only witness to a murder (unless you count his cat), and thus could be a witness to put these criminals behind bars in the tale "See No Evil".

While Ragman did most of the heavy lifting in this issue, it was the cat who was the real hero (and Rory introduces Teddy to Bette, as the two head out to a date in Chinatown....).

This issue's letter page also states that Rory is Irish, not Jewish (as though one couldn't be both...). 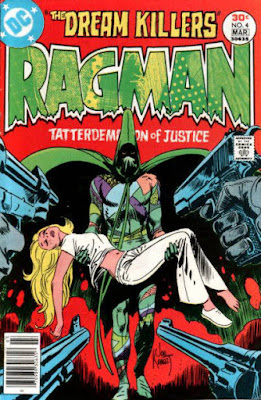 When a young boy dies of a drug overdose, Rory suits up to bring down the drug ring in his neighborhood in Ragman #4 (February-March, 1977, by Robert Kanigher, Joe Kubert and the Redondo brothers) in "The Dream Killers", the first of two stories in this issue.


This first story sees the Ragman facing off against Seriph and his gang (the owner of a crooked amusement park, Funland) , as well as helping Jeanne Wilson (though not successfully, as she dies).


The second, untitled story, is by Robert Kanigher and Joe Kubert, and has Ragman dealing with 3 grave robbers looking for a hidden treasure in a silent story (as Kubert's images are powerful without words). 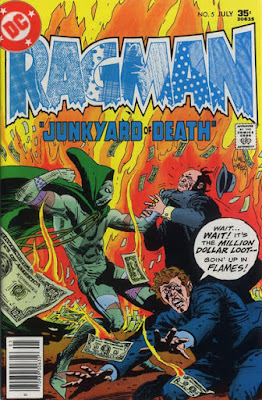 The last issue of Ragman is a special treat, provided by Robert Kanigher and Joe Kubert, as Ragman #5 (June-July, 1977) features "The Junkyard Of Death".

Yet again, the mob tries to use Opal as bait to draw out the man in rags, but this time, they also have found the million dollars that was hidden in the junkyard (and Bette suggests to Rory that they get married so they could adopt Teddy, and take him out of this area and out of the orphanage).

Yet, this dream, like the cash (and the promise of a next issue)....all goes up in smoke!

This issue also is where it is revealed that Joe Kubert had done the layouts for the earlier four issues, which he had not been credited in. 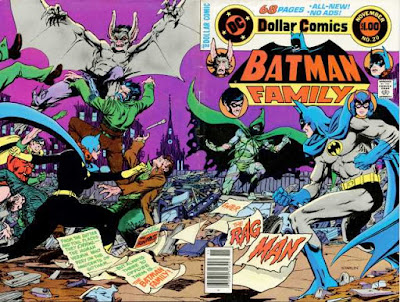 Ragman did return, with Batman Family #20 (October-November, 1978 by David V. Reed, Michael Golden and Bob Smith, under a Jim Starlin cover), and "Enter The Ragman".

This issue sees Batman and Ragman meeting for the first time, as the Gotham Associates Realty Corporation tries to swindle the residents of Ragman's neighborhood out of their homes, and Batman and Ragman have to work together to stop the crooked realtors. 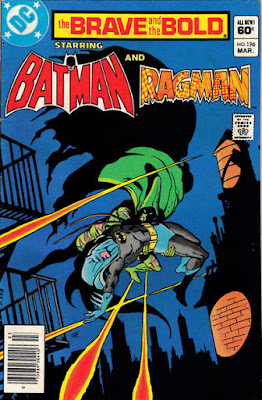 It took a few years for Ragman to return again, this time in Brave and the Bold #196 (March, 1983, by Robert Kanigher and Jim Aparo) with the story "The Two Faces Of Midnight".


This time around, Batman and Ragman work together to deal with the Dynamiters for Democracy...a terrorist group threatening Gotham.


This requires Batman and Ragman to switch costumes for a bit, seeing how the other half lives.... 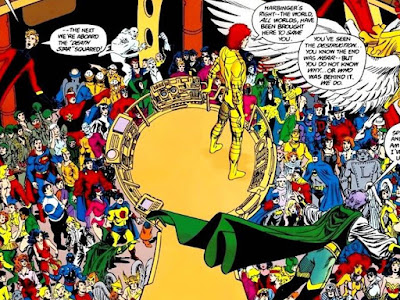 Ragman did appear again, but mostly just in the background of bigger things, with Red Tornado #3 (September, 1985) and Crisis On Infinite Earths #5 (August, 1985), showing Ragman was willing to work with others (but mostly, he was just a face in the crowd, in this case, standing next to Jonni Thunder, drawing an end to this heroes journey....).

Treasure In The Trash 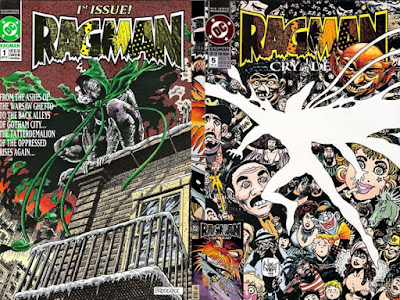 Still, Ragman wouldn't go away, and the character returned, with a slightly altered history, as a part of a legacy of Jewish protectors, using a mystical rags that took the souls of criminals to repent (starting with Ragman #1 of October, 1991 by Keith Giffen, Robert Loren Fleming, and Pat Broderick) for an 8 issue mini-series.  This Ragman came back for another 6 mini-series (with covers by Joe Kubert), and a few team-ups with Batman... 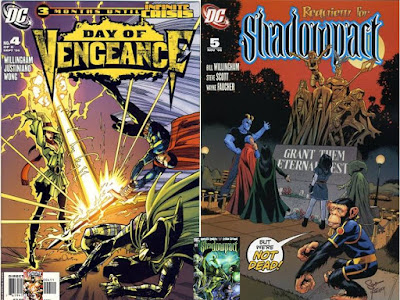 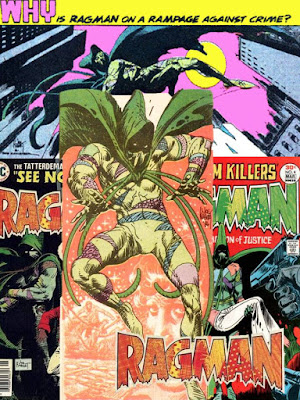 Posted by Dave's Not Here Comic Blog at 4:40 AM