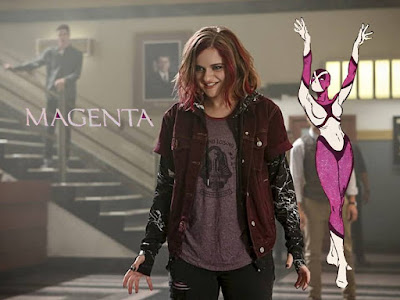 Frances Kane didn't start as a foe for the Flash.....if anything, her beginnings were much friendlier.

It was only due to her magnetic powers, and the unsettling affects they had on her mind that the lady who would come to be known as Magenta menaced the Flash.....

The Possessing Of Francis Kane 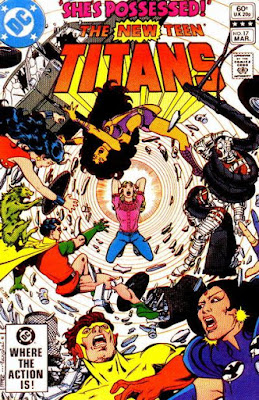 An ominous start, when they misspelled her name in the title of New Teen Titans #17 (March, 1982, by Marv Wolfman, George Perez and Romeo Tanghal), but that kind of sums up the luck Frances had, even from the start.  An automobile accident kills her brother and father....and her mother blames Frances, that she is possessed and killed them.  Really, the Blue Valley girl was in magnetic contact with the magnetic foe of Green Lantern, Dr. Polaris, and with help from her childhood friend, Wally West (who reveals his identity as Kid Flash) and fellow Titans Raven and more, they help Frances deal with her emerging magnetics, saving the girl (and their HQ, the Titans Tower, where they brought her to study her) and foiling Dr. Polaris' plans to escape his extra-dimensional prison.

Brotherhood of Evil and more 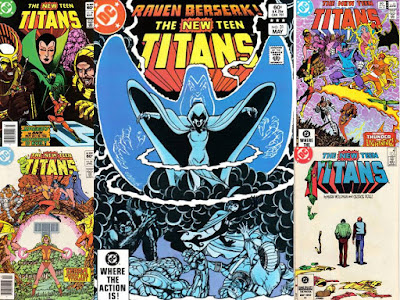 Frances next appeared in New Teen Titans #29 to #32 (all in 1983 and by Marv Wolfman, George Perez and Romeo Tanghal), wherein Ms. Kane returns to Titans Tower to tell Wally that her magnetic powers have returned....and while there, she helps the Titans against the second version of the Brotherhood of Evil.  The last issue of this run involves two mutant brothers, Thunder and Lighting, who also suddenly manifest powers (and Frances returns to Blue Valley....with Wally rethinking his life, and then giving up being Kid Flash as of New Teen Titans #39  of February, 1984 by Wolfman/Perez/Tanghal, leaving the Titans and going to Blue Valley with Frances).  Frances and Wally return to Titans Tower briefly in Tales of the Teen Titans #45 (August, 1984), and save Aqualad and Aquagirl from H.I.V.E. 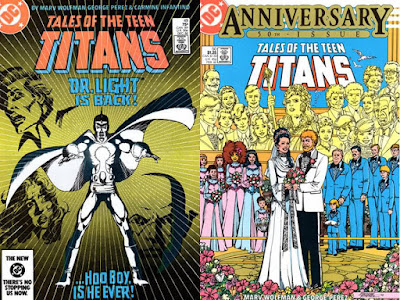 Tales of the Teen Titans #49 (December, 1984 by Marv Wolfman, George Perez, Carmine Infantino and Mike DeCarlo) sees Frances saving the Flash (Barry Allen) from the JLA/Titan foe Dr. Light (Arthur Light, a villain who uses light-based weapons against heroes) while Wally finds out that his super-speed is killing him.

Still, the duo show up for Donna (Wonder Girl) Troy's wedding the next issue!

The Menace of Trigon 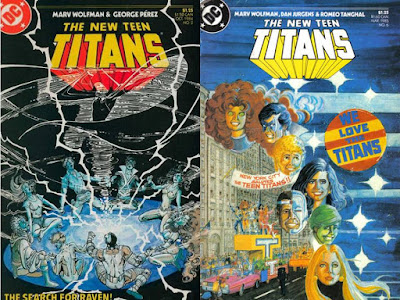 The Titans recruit Wally to help with Raven (who has been possessed by her demonic father, Trigon), with Frances appearing in New Teen Titans #2 (October, 1984) wish Wally luck, and being there for him when he returns in New Teen Titans #6 (March, 1985).

Small appearances for Frances, but showing a rift forming between her and Wally that even her magnetic powers can't fix. 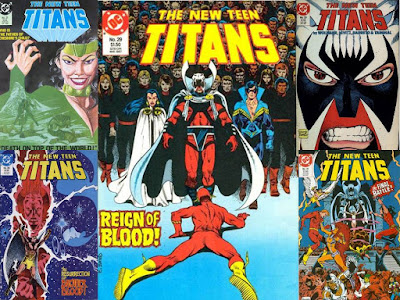 While the Crisis on Infinite Earths didn't involve Frances, it did change Wally from Kid Flash to Flash, limiting his speed but curing him from the fatal end of it.  With New Teen Titans #21 (June, 1986), Wally was back with the Titans for a while as the Flash, leaving Frances behind for a time.  Problem was, the battle against Brother Blood (leader of a religious cult) went badly, so the remaining Titans called her in to help in New Teen Titans #28 (February, 1987), where she showed a costume, and with New Teen Titans #29 (March, 1987), had the name Magenta.  She aided as best she could, being there for the end of Brother Blood in New Teen Titans #31 (May, 1987), with the last four issues being by Marv Wolfman, Paul Levitz, Eduardo Barreto and Romeo Tanghal.

Flash On His Own 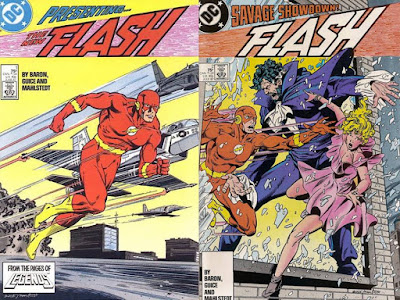 Flash and Frances left the Titans at this time, with Wally inheriting Barry Allen's mantle fully (as well as winning a lottery) in Flash #1 (June, 1987 by Mike Baron, Butch Guice and Larry Mahlstedt).  All the while, the relationship between Wally and Frances was still strained, and after battling the immortal Vandal Savage, Frances left Wally after events in Flash #2 (July, 1987). 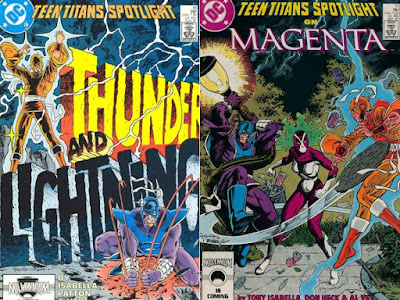 Teen Titans Spotlight #16 (November, 1987 by Tony Isabella, Chuck Patton and Al Vey), found Frances on her own, working at S.T.A.R. Labs for Alysia Damalis (and helping in a battle against Superman's foe, the Atomic Skull).  Along the way, she works with Thunder and Lightning (who have come looking for help with their powers) and it is revealed Alysia is hypnotizing super-powered people to use for nefarious deeds (including Magenta!).  With Teen Titans Spotlight #17 (December, 1987 by Tony Isabella, Don Heck, Al Vey and Pablo Marcos), with Dr. Damalis reviewing how she made Frances' Magenta evil, Thunder and Lightning free her from the doctor's control (but, there is another victim out there somewhere....).  Both issues with a cover by Jerome K. Moore! 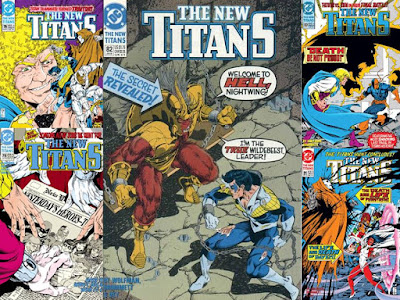 Magenta serves a small part during the "Titans Hunt" storyline, wherein evil forces tied to Raven try to possess various super powered associates of the Titans with Frances having small bits in New Titans #78 and #79 of 1991, and New Titans #82 to #85 of 1992.

Sadly, she barely has any speaking lines, and is mostly a victim here, as Deathstroke the Terminator (an early Titans foe) has to work with the Titans to free them from their hidden foe.... 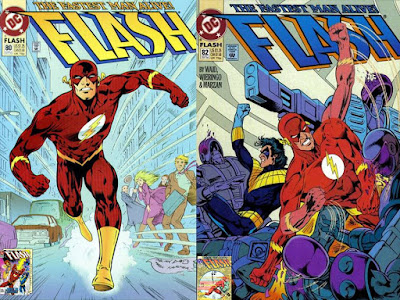 Magenta returns to Flash, with Wally much more adjusted to being Flash with Flash #80 (Early September, 1993 by Mark Waid, Mike Wieringo and Jose Marzan, Jr.), and she sticks around as Flash, Nightwing and Starfire battle the Combine (a villainous group) trying to control the crime in Keystone City over the course of Flash #81 to #83 of 1993. 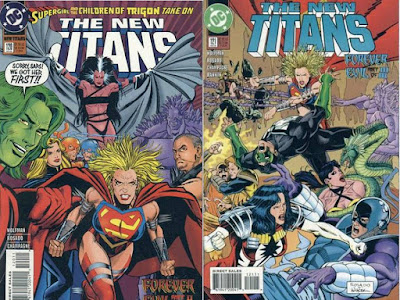 Sadly, Magenta is Raven's pawn again, as of New Titans #119 (March, 1995 by Marv Wolfman, Will Rosado and Keith Champagne), as she is possesses by the Children of Trigon (along with Changeling, Thunder, Lightning, Supergirl, and Crystallex) to fight the current team of Titans (including Arsenal/Roy Harper, Damage, Terra, Mirage, Impulse/Bart Allen, Green Lantern Kyle Rayner and Darkstar Donna Troy) over the course of New Titans #120 and #121 (April and May, 1995), leaving Frances not at all well, and keeping her new, black costume for her next appearance looking for Wally... 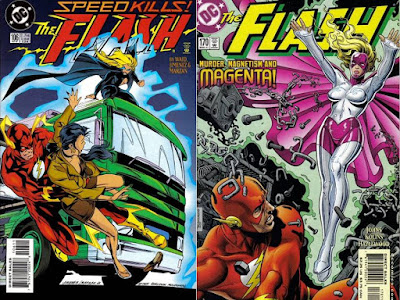 Frances came back to the Flash with Flash #106 (October, 1995), upset that Wally was with Linda Park, and except for a brief time working with the Titans in the last two issues of the 3 issue JLA/Titans mini-series of 1999 and in Titans #25 of March, 2001, has been pretty much feeling the pull of the evil side of her magnetic personality, though she did allow police to take her in in Flash #170 (March, 2001 by Geoff Johns, Scott Kolins and Doug Hazelwood), though she does fall under the influence of Cicada and his cult through Flash #173 (June, 2001) and ends up in Iron Heights (a prison for super-powered people near Central City).  Because of her magnetic powers, Frances seems to attract trouble!