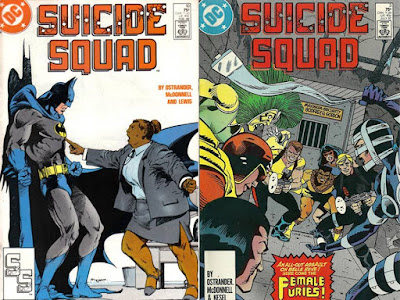 She brought Task Force X back from the (mostly) dead by sheer force of will, to accomplish what she wanted to get done.

Amanda also recruited a few specific people, Nightshade and Nemesis, that would help the covert nature of the team, and were heroes, which would also help deal with the criminal element that was a part of the team.

Here's the facts on these three Suicide Squad members. 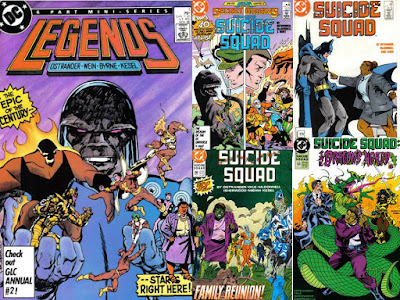 Amanda Waller was introduced in Legends #1 (November, 1986 by Len Wein, John Ostrander, John Byrne and Karl Kesel), already fighting with Rick Flag, as she started her push to have him recruit villains to be a part of Task Force X, with him as leader.  Amanda really didn't want Rick around, she wanted Bronze Tiger to be the field leader, as she felt Rick's previous failures with the team made him a liability.  Amanda had the nickname of "the Wall" and she hit Rick (and almost everyone around her) like running into one.  You did things Waller's way, or else.  But, how did she get so tough? 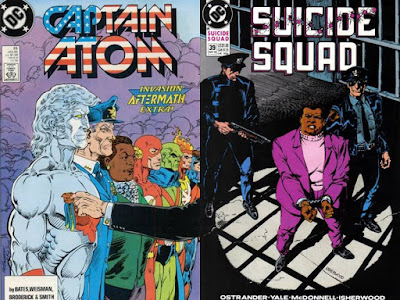 Amanda started life as Amanda Blake, living in a bad neighborhood in Chicago, falling in love and marrying Joseph Waller, and having children with him.  Then, the streets of Chicago hit back, claiming the lives of Joe, Jr. and then Damita, pushing Joseph over the edge, to die in a shoot out with the man suspected of raping and killing Damita.  Amanda met Simon LaGrieve, who helped her carry on.  Amanda's kids all got college degrees, then Amanda got one herself.  Amanda went to work for Marvin Collins, helping him to get elected to Congress.  While doing research in Washington, DC, Amanda found the files on Task Force X, and thought of a way that old group could help people in the here and now (most of Amanda's pre-Squad history can be found in Secret Origins #14 of May, 1987, by John Ostrander, Luke McDonnell and Dave Hunt). 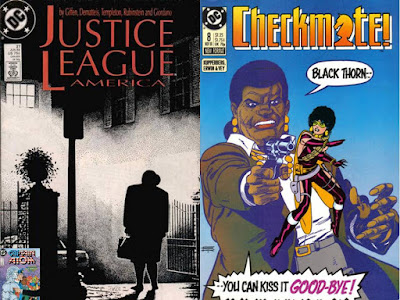 Amanda Waller's history is tied to that of the Suicide Squad, but she also had influence on many other heroes, like Captain Atom, Superman, the Justice League, and even headed Checkmate (whose later series has been collected, but only the issues with the Janus Directive from the original series...DC needs a a collection of the issues of the original Checkmate! now!  At least the first 14 issues in one volume plus Action Comics #598...please!).

Amanda found interesting people with problems to contribute to her cause....and Nightshade was one of the earliest..... 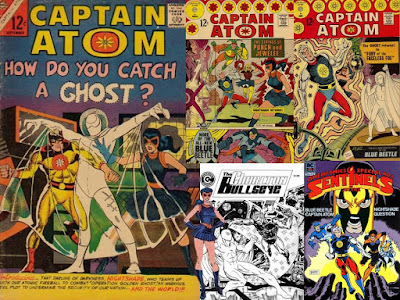 Eve Eden premiered in Captain Atom #82 (September, 1966 by David Kaler, Steve Ditko and Rocco Mastroserio) as a supporting character in Captain Atom's life.  Eve was the Senator Wayne Eden and Magda Eden, with Magda revealing to her young daughter that she was from the land of the Nightshades, which had been taken over by the evil Incubus.  Magda also showed Eve and her brother, Larry, how to turn into shadow form and cross dimensions, taking them back home, where they captured Larry, with Eve and her mom escaping, though Magda died from her wounds. 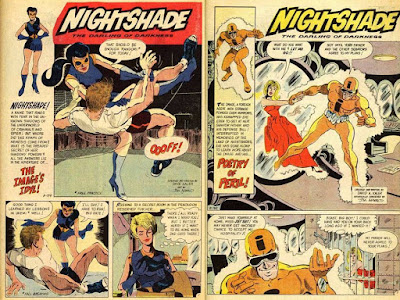 Eve began to train, putting on a black wig to hide her blond hair, and prepared to go back to the Nightshade dimension to rescue her brother Larry (and these early adventures, along with battles helping Captain Atom with the Ghost and Punch and Jewelee, and solo battles against Jewelee and the Image, took place in Captain Atom #82, #85 and #86, and her origins and solo battles were in her own back-up feature in Captain Atom #87 to #89 from August to December of 1967 (with art by Jim Aparo). 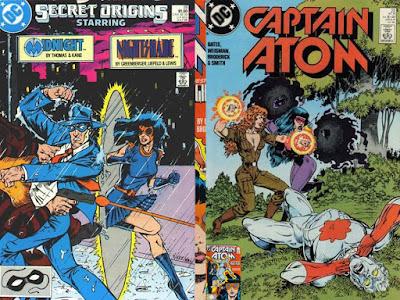 Thing is, that was Eve's pre-Crisis history.  As revealed in Secret Origins #28 (July, 1988 by Robert Greenberger, Rob Liefeld and Bob Lewis), Eve had never met Captain Atom or the Ghost prior to joining the Suicide Squad, instead having been partnered with King Faraday, though most of the rest of her history was intact.  Nightshade still wanted to get ready to go back to the Nightshade dimension, and did during the run of the Suicide Squad....much to her own and the Enchantress' dismay....as Eve took additional power from the Enchantress (and changed her costume as well).  Eve did continue on with the Squad until its end, later joining up with a couple of other groups (and she even met Captain Atom as well, early on.....).  But, she also fell for the man who helped her infiltrate the Jihad during Suicide Squad #1 (May, 1987). 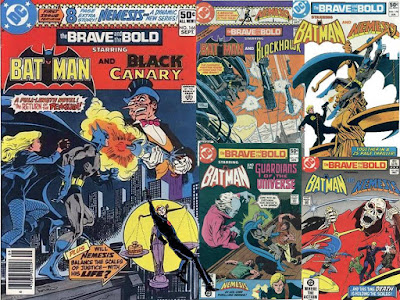 Tom Tresser got his start in Brave and the Bold #166 (September, 1980 by Cary Burkett and Dan Spiegle), and was the son of Chet Tresser, and American agent, and after Chet died, Tom and his brother, Craig wanted to join the agency to help their country.  Tom proved to be better at invention, and Craig the better agent, so that's where the two ended up, until, while on assignment, the crime lords of the Council caught Craig, brainwashed him, had him kill agent Ben Marshall, and agents then killed Craig.  That began Tom's war against the Council, and it's six main members, as well as it's "head".  That war unfolded over the course of Brave and the Bold #166 to Brave and the Bold #193 (December, 1982), with Tom ending the Council (also a series that cries out for a collection in tradepaperback!). 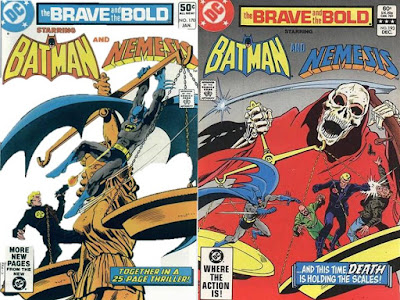 Though Tom was thought dead by Batman at the end of his Brave and the Bold adventures, he did indeed survive, though severely wounded.  Found by agents of the U.S. government, they took care of his rehabilitation, planning to use his skills of infiltration, mask making and non-lethal freeze bullets.  For a time, Tom worked with the Suicide Squad, falling for Nightshade, but his moral code and own stubborn attitude would not let him work alongside Amanda Waller and her "do anything and sacrifice anyone for her cause". 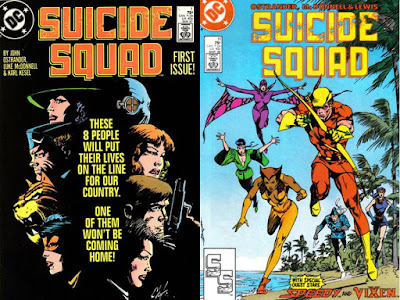 There were other members recruited for the Suicide Squad, like Firestorm foes Mindboggler, Parasite, Slipknot, Killer Frost, Multiplex and Plastique, and many others like Penguin, Chronos, the Thinker, Captain Cold, Count Vertigo, Dr. Light, Poison Ivy, and heroes as well, like Black Orchid, Speedy, Shade the Changing Man, Manhunter, Katana and Vixen, and so many more, all a part of the team, and all there to do as Amanda Waller wanted....or else! 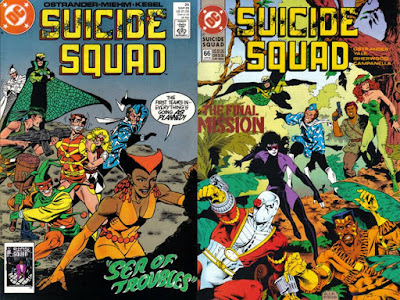 Still for 66 issues and Annual and a few crossovers, guest appearances and mini-series, the Suicide Squad kept the world safe from the menaces too dangerous for any heroes to face, and occasionally, they made the ultimate sacrifice as well.

In the end, fighting for everyone, and laying down your life for others, might have been the best end people like this could have hoped for.
Posted by Dave's Not Here Comic Blog at 4:23 AM