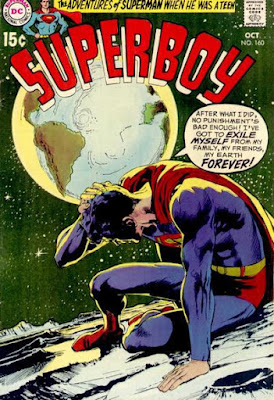 In the shadow of United States landing on the moon, in an issue of Superboy that came out in the month of August after the Moon Landing (Superboy #160 of October, 1969), was a story about the time Superboy spent on the Moon, captured under this cover by Neal Adams.

In "I Chose External Exile" by Frank Robbins, Bob Brown and Wally Wood, Clark Kent and Lana Lang meet visiting Egyptian envoy Abdul Amahdi and his daughter, Cleop in Smallville.  Cleop becomes interested in both Clark and Superboy, much to Lana's dismay.  Superboy attends a ball with Cleop, after which, they kiss, but this seems to crush Cleop, killing her....and Superboy exiles himself to the moon. 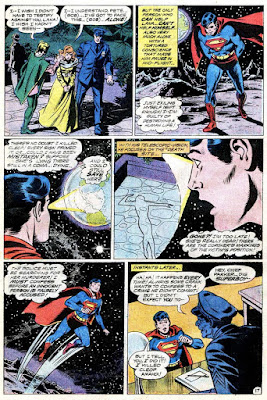 Cleop (who doesn't appear dead), returns to the party, confronts Lana, who meets with her on the roof, then it appears Lana kills her by throwing Cleop off the roof, with Pete Ross witnessing the event.

Lana is arrested, but Superboy, using his vision powers, sees what's going on, returns to Earth, and confesses his own crime.  A little research finds Abdul was not who he claimed to be, but was instead Professor Tingly, who had unearthed Cleopatra....and, animated her as revenge against Professor Lang (Lana's father).

Case solved, and Superboy could go back to his life to grow up to eventually become Superman....
Posted by Dave's Not Here Comic Blog at 4:32 AM