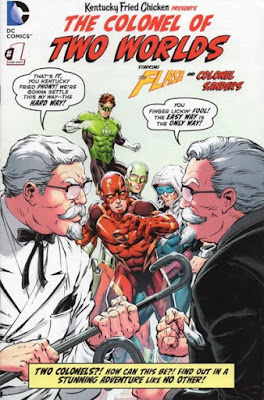 Yes, it is a shameless plug for Kentucky Fried Chicken on this National Fried Chicken Day...with this issue of The Colonel Of Two Worlds #1 (2015) with a cover by Tom Grummett and Trevor Scott, and interior story by Shaine Edwards and Tony Bedard, and art by Tom Derenick and Trevor Scott.

An evil Colonel from Earth-3 starts to ruin the reputation of Colonel Sanders, and he has to recruit Green Lantern and the Flash to set things right.

This ties into the KFC commercials of the time, who have various actors in the role of the Colonel.

Posted by Dave's Not Here Comic Blog at 3:51 AM