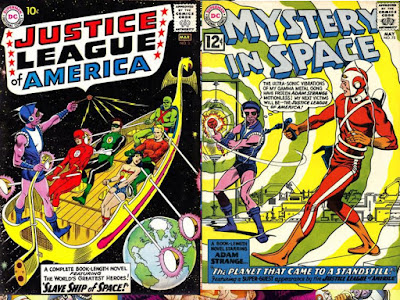 Kanjar Ro was an interstellar threat, not only to the Earth and the Justice League of America, but to the planet Rann, its inhabitants and their adopted hero, Adam Strange as well.

His beginnings seem simple enough, but Kanjar Ro quickly evolved into a much bigger threat over time.

Let's go back to the beginning, and follow this criminal through his career.... 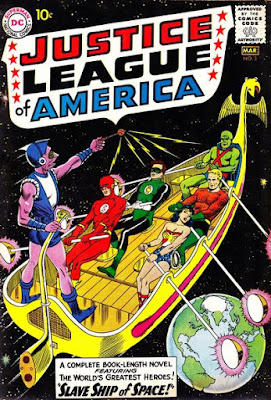 Kanjar Ro paralyzed everyone on the planet Earth with his Gamma Metal Gong, to introduce himself to the JLA in Justice League Of America #3 (February-March, 1961) by Gardner Fox, Mike Sekowsky and Bernard Sachs.

Kanjar Ro, the dictator of Dhar, wanted to recruit the JLA to fight for him against three rival rulers: Queen Hyathis of Alstair, King Kromm of Mosteel and Emporer Sayyar of Llarr; when the JLA captures these reprehensible rulers, Kanjar Ro would free the citizens of Earth after taking them around on his slave ship he controlled with his Energi-rod.  The Martian Manhunter makes Kromm his prisoner, Wonder Woman and Aquaman capture Hyathis and Flash and Green Lantern defeat Sayyar....and thankfully, the JLA members recorded the voices of each of them, as them all saying Kanjar's name was what was needed to free the citizens of Earth, which Ro tried not to do.  After Superman, Batman and the rest of Earth was freed, the four rulers were imprisoned on a plant created by Superman and shielded by Green Lantern to keep the rest of the universe safe, all in the last mission of the charter members of the JLA in their own title.

The Planet That Came To A Standstill 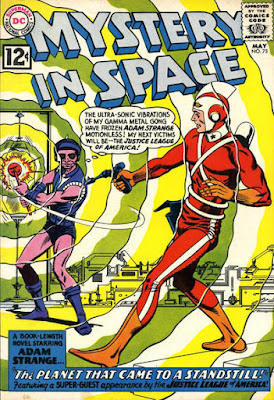 As Green Arrow joined the JLA, Flash had proposed Adam Strange for membership in the team, requiring the story of Mystery In Space #75 (May, 1962) by Gardner Fox, Carmine Infantino and Murphy Anderson to come into existence, as the team had yet to meet Adam Strange.

This tale has Kanjar Ro escaping the planet Superman created with his Energi-rod of Dhorite, and heading to Rann to power up to face the JLA.

While there, he captures Adam Strange and Alanna, but Adam escapes, and uses Kanjar's slave ship to go to Earth, catching a Zeta Beam on Earth to go back to Rann.

The JLA find the slave ship on Earth, and half of them (Green Lantern, Martian Manhunter and Batman) go to Rann to fight Kanjar Ro. 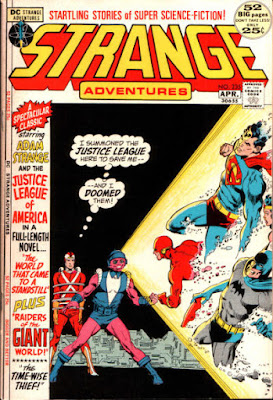 Adam uses the Gamma Gong to paralyze everyone (including half the JLA with Flash, Aquaman, Wonder Woman and Snapper, Alanna and Kanjar Ro) on Rann, then the Zeta Beam wears off sending him to Earth, where he gets the rest of the JLA to capture the now more than 3 times powerful than Superman Kanjar Ro.

Strange defeats Ro using his Energi-rod, made of the material of Ro's home planet, which Adam deduces would be a harmful to Kanjar Ro as Kryptonite is to Superman, but pays a price, being hit with part of a beam from the rod, resulting in his being unable to stay permanently of Rann, thus going back to traveling there temporarily by Zeta Beam.


Decoy Missions Of The Justice League 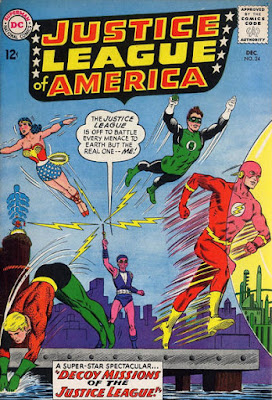 With Justice League Of America #24 (December, 1963) by Gardner Fox, Mike Sekowsky and Bernard Sachs (under a cover by Murphy Anderson), Kanjar Ro escapes his Dhorite prison on Rann, and causes trouble on Earth for the JLA.

Ro escaped by creating an aural duplicate of himself thanks to some newly gained mental abilities, then menaces the Earth with imperfect doubles of JLAers Aquaman, Atom, Wonder Woman, Green Lantern and Flash, stealing the entire Earth (and replacing it with its aural duplicate).  Adam Strange discovers Kanjar Ro's escape, and returns to Earth as his Zeta Beam wears off (with his aura drawn to aural Earth, and his body on regular Earth, he's able to find the JLA, find Earth and reunited everyone with their duplicate, defeating Kanjar Ro, as the brain stimulating radiation he had absorbed to allow him to do this wore off).

The Parallel Perils Of Adam Strange 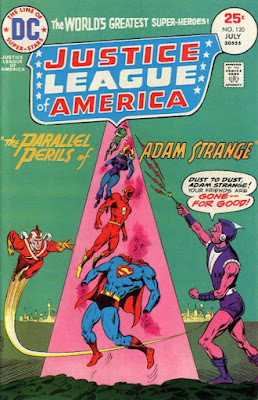 It took until Justice League Of America #120 (July, 1975) by Cary Bates, Dick Dillin and Frank McLaughlin (under a cover by Ernie Chan and Jose Luis Garcia-Lopez) to return, but this was a doozy!

A contingent of JLA members (Superman, Flash, Green Lantern, Black Canary and Elongated Man) are in the South Pacific and find themselves accidentally transported to Rann by a Zeta Plus Beam, where they end up being the planet's champion for a bit, as Adam is depressed after having lost his fiancee, Alanna, to one such menace (the same enlarged magnifying glass that melted them all!).  Problem is, the same menace that took her life...and convinces her father, Sardath, to use the beam to send him and the League members empty uniforms back to Earth (as Kanjar Ro, who reconstituted these menaces, such as the robot Borg, giant bird Kallula and two giant items, continues his plans against the people of Rann, free of interference). 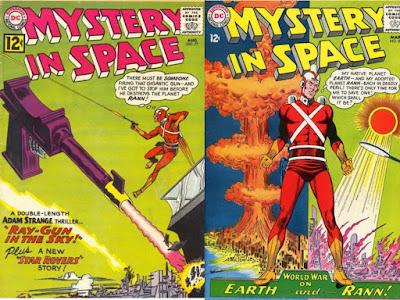 The story concluded in "The Hero Who Jinxed The Justice League" in Justice League Of America #121 (August, 1975) by Cary Bates, Dick Dillin and Frank McLaughlin (under an Ernie Chan cover).

Adam, a master of tact, appears in the JLA Satellite, to tell the JLA members Batman, Aquaman, Green Arrow, Atom and Hawkman of the fate of their fellow heroes, but that does not go well.  Still, menaces wait for no man, and trouble comes in as a cloud creature forms on Earth attacking a city, prompting the JLA to go into action, leaving the dejected Adam Strange behind. 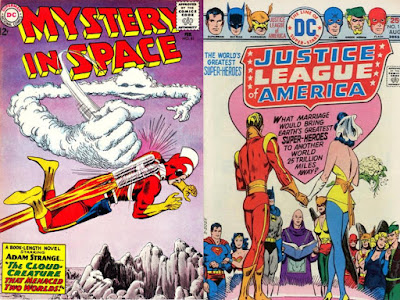 Good thing he did stay behind, as Kanjar Ro shows up to gloat, giving away parts of his plan of using past menaces of Rann...and, Adam is able to get his Energi-rod, just as his Zeta Plus Beam wears off, returning him to Rann.  On Rann, Adam figures out where Ro's hidden headquarters is, finds spheres which are really the remains of the JLA, and uses the Energi-rod to restore them, so they can go back to Earth to help the rest of the JLA....and Adam finds something else in the cave, one more sphere, which is...Alanna!  After the heroes defeat Kanjar Ro and the Cloud Creature on Earth, the whole JLA gathers to go to Rann....for Adam's wedding. 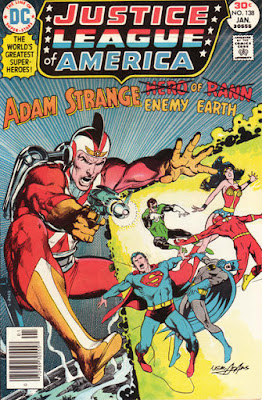 Next up, an appearance of Adam Strange under a Neal Adams cover for Justice League Of America #138 (January, 1977) by Cary Bates, Dick Dillin and Frank McLaughlin.

Alanna comes to inform the JLA that Adam Strange has been bouncing around in time thanks to being overcharged with Zeta Beam radiation, and is a menace to the 73rd Century.  Superman, Batman, Wonder Woman, Aquaman and Flash go to investigate, where they meet the Green Lantern of the 73rd Century to stop Adam and drain him of his access energy...

...but things get bad as the JLA members return home. 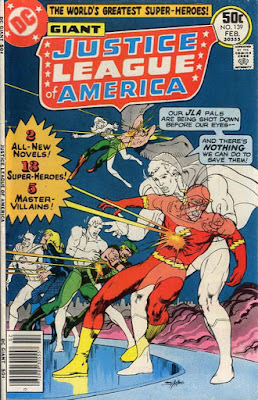 Kanjar Ro next appears in "The Cosmic Conspiracy Against Adam Strange" in Justice League Of America #139 (February, 1977) by Cary Bates, Dick Dillin and Frank McLaughlin, wherein (yet again) Adam reports to the remaining JLA of their missing teammates, but this time, he seems to be talking to them?  (The team is there, just turned into phantoms only Adam can see and hear), which the League doesn't believe, until an overcharged panel on the Satellite explodes, nearly killing Black Canary, but the Flash materializes to save her.   The JLA, including its invisible members and Adam, go back to the 73rd Century to face their problems, figuring the other members will be restored as adrenaline kicks in...but that doesn't seem to work as well, and it takes Adam Strange to figure out how to save the day, that it was the energy which made Flash solid, not the emotional rush.

All well and good, but where was Kanjar Ro?

Hint, hidden in plain sight (as that Green Lantern of 73rd Century was a little too helpful...including using his Power Ring against yellow items....but, that wouldn't be a problem for a disguised Energi-rod, would it?). 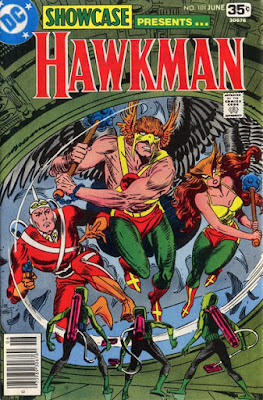 Time for a Joe Kubert cover, that of Showcase #101 (June, 1978),  by Jack C. Harris, Al Milgrom and Murphy Anderson, in a story featuring Hawkman and Hawkgirl, guest starring Adam Strange, Alanna and Sardath.

Hawkman and Hawkgirl were on their spaceship trying to contact their homeworld of Thanagar, when Adam Strange invaded their ship, asking them to go into hyperspace to get away.  The couple does, after escaping Adam's alien foes, then, he explains the situation.  Rann had been invaded by an army of past invaders allied together, including the Vantors, the Kirri, the Arverse and the Dust Devils.  Something had allied these forces and Adam was headed to Earth to get the help of the JLA.  Problem is, the Thanagarian ship was headed to Rann, with Hawkman thinking Adam had sabotaged it, until realizing they had been boarded by an old foe of his, the Shadow-Thief, which they quickly defeat, but still have to make an emergency landing on Rann...where they discover the main invaders are...Thanagarians! 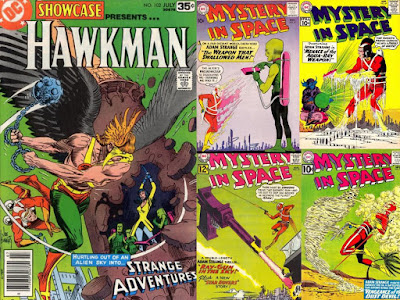 Things get odder with "Strange Adventures" in Showcase #102 (July, 1978), with another Kubert cover, and interiors by Harris, Milgrom and Anderson.

The heroes are found by Sardath, who Zeta Beams them to safety, and he explains the person who has taken over Rann has captured Alanna in Ranagar.  Adam goes to free her, as Alanna meets her captor, Kanjar Ro, who had allied the alien races to take control of Rann.  Hawkman, Hawkgirl and Adam work with the resistance to free Alanna, but realize Kanjar Ro is already gone...to invade Thanagar! 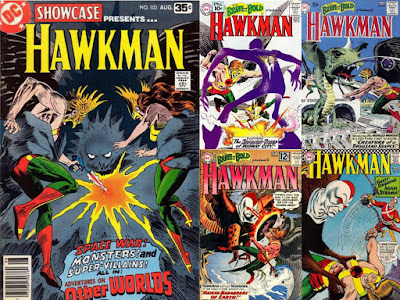 "Adventures On Other Worlds" is the last of these trio of tales from Showcase #103 (August, 1978), covered by Joe Kubert, and interiors by Jack C. Harris, Al Milgrom and Murphy Anderson.

Here, the reason Kanjar Ro is attacking Thanagar is revealed, as it is Hyathis who now rules Thanagar, as she had freed them from their Equilizing Plague after escaping the planet Superman made, and the Thanagarians made her their leader.  Kanjar Ro attempts an assassination on Hyathis, as Hawkman fights former foes Shadow-Thief, shape-changer Byth and the Manhawks, eventually arriving with Hawkgirl and Adam Strange to stop Kanjar Ro.  In gratitude of the current end to the Rann-Thanagarian War, Hyathis does not kill the trio, but does banish Hawkman and Hawkgirl from Thanagar, while Adam Strange returns home to free the Rannians from the invading aliens still there.


Death At The Dawn Of Time 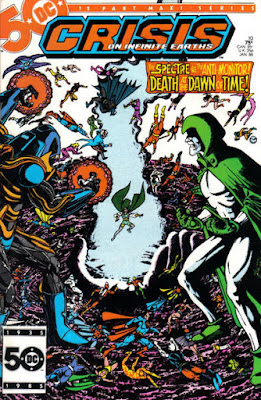 ....this as the united villains of the remaining Earths first faced the rest of the heroes, then had to work with them to prevent the Anti-Monitor from destroying the Multiverse! 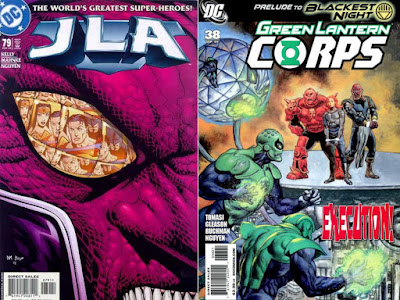 When Kanjar Ro returned in the first regular issue of Hawkworld, he was as changed as Hawkman and Hawkwoman were (now being more insectlike, as well as a minor thrall in Thanagarian government).  Still, Kanjar Ro persevered, returning to face Superman in Action Comics, menacing the JLA, even impersonating Despero to battle the heroes in Trinity, being recruited to the Sinestro Corps in the Green Lantern Corps, and being recruited by Vril Dox along with Despero, Captain Comet and Adam Strange to join the L.E.G.I.O.N. to fight Starro in R.E.B.E.L.S.

If there is menace in the galaxy, likely Kanjar Ro will be around, plotting away...
Posted by Dave's Not Here Comic Blog at 4:36 AM