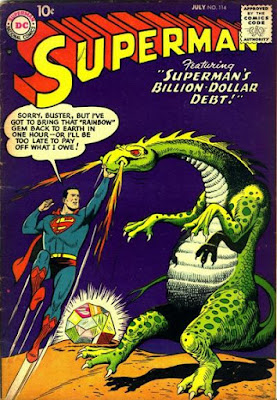 In one of the stories of Superman #114 (July, 1957), under a cover by Al Plastino, is "Superman's Billion-Dollar Debt", by Otto Binder, Wayne Boring and Stan Kaye.

IRS Agent Jason Hawker comes after Superman for failure to pay his taxes, which Superman figures he doesn't owe, as he donates all his money to charity.  Hawker claims not so....and Superman tries to collect various treasures to pay his debt, failing as he does so.  But, there was a solution....Superman's dependents, which are all the inhabitants of Earth, who he has saved countless times.
Posted by Dave's Not Here Comic Blog at 3:11 AM