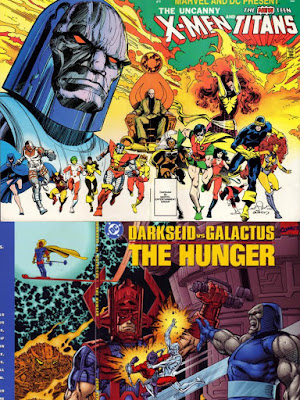 Jack Kirby created some of the most important concepts for Marvel Comics, such as the Fantastic Four, Silver Surfer and the X-Men, along with their friends and foes.

"The King" also created Darkseid, one of the vilest villains of the DC Universe, the ruler of the planet of Apokolips, the evil side of the New Gods.

Seems like those heroes should protect us from that fearsome foe, but they weren't in the same universes....

Two special comics show they could reach each other.... 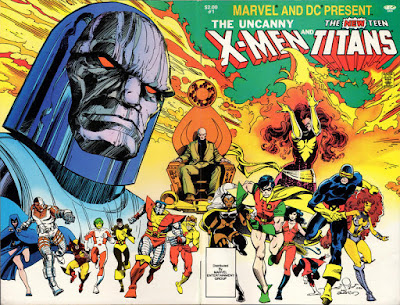 In Marvel and DC Present Featuring The Uncanny X-Men and The New Teen Titans #1  (1982), the two teams of heroes seem to exist on the same world, and face the menace of Darkseid as he tries to revive the power of the Dark Phoenix in "Apokolips...Now" by Chris Claremont, Walt Simonson and Terry Austin.

Darkseid plans to breach the Source Wall and to do that, tries to collect the memories of the Dark Phoenix from the X-Men, but while doing that, it also alerts the Titans' psychic, Raven, to have visions of a fiery bird, which her alien team mate of Starfire recognizes as the Dark Phoenix.  Deathstroke the Terminator is there to prevent trouble in case the X-Men retaliate, and has a battle with Wolverine (at the time, two of the greatest fighters of their respective universes, but in one universe here).  Professor X even makes use of Metron's Mobius Chair, and after the Dark Phoenix is  revived, the two teams work together (called collectively the X-Titans, showing a little favoritism to the Marvel heroes, as their regular writer did script this tale) to stop Darkseid's plan.

An ambitious story, made all the more enjoyable that it was all done in one issue, as were most of the team-ups between DC and Marvel characters in the day, such as the two Superman/Spider-Man tales and one Batman/Hulk tale, but this tale also signaled the end of the company crossovers for a time.


Darkseid Vs. Galactus: The Hunger 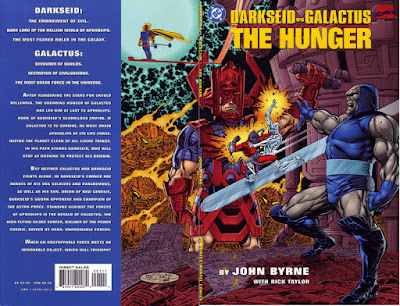 Many years later, Darkseid faced off against the world-eater of Galactus in Darkseid Vs. Galactus: The Hunger (1995) by John Byrne, as DC and Marvel brought back their intercompany team-ups.

Here most of the battles are between the subordinates of the main villains, as Galactus plans to eat Apokolips, with Silver Surfer facing off against Darkseid's Para-Demons, as well as the New Genesis warrior of Orion, as well as covering the origins of Galactus, the Silver Surfer and the founding of the two worlds of New Genesis and Apokolips.  Galactus does indeed finally land on Apokolips, only to find the planet devoid of life, and thus useless to the eater of worlds, though Darkseid fought tooth and nail to keep this worthless garden, simply because it was his. 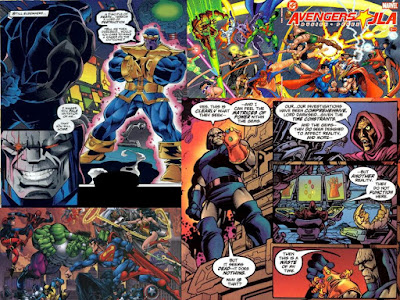 Darkseid had a small role in the DC Vs. Marvel mini-series of 1996, where he confronted the evil Thanos (worshiper of Death), and likely the result of that battle was shown in JLA Vs. Avengers (2003 and 2004), where Darkseid showed off a new accessory a bejeweled glove (the Infinity Gauntlet), which, the Lord of Apokolips was unable to use (likely due to the fact that its infinite power was only that in the Marvel Universe, not in the DC Universe).
Posted by Dave's Not Here Comic Blog at 4:44 AM