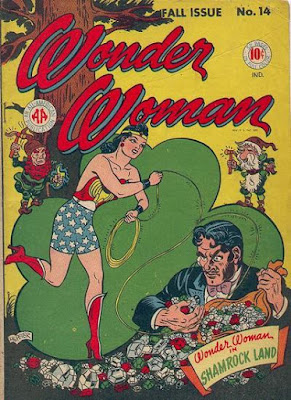 Wonder Woman celebrated the holiday back in Wonder Woman #14 (Fall, 1945) by being "Captured By Leprechauns" in a story by William Moulton Marston and H. G. Peter, with this story being reprinted in the Wonder Woman Archives #6 of 2010.

Etta Candy finds leprechauns while chasing after a squirrel that stole her last piece of candy, which leads Wonder Woman into a battle with the leprechauns, which results in Wonder Woman losing her memory for a time, as well as confronting a killer who tries to steal the jewels of Princess Elaine of Shamrock Land... 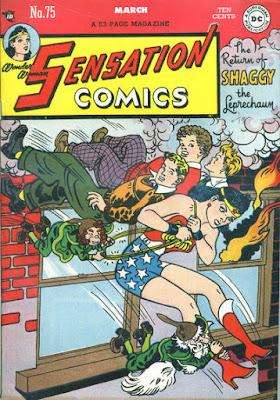 ...with leprechauns Shaggy, Hoppy and Woggle returning in Sensation Comics #75 (March, 1948), along with Queen Moonbeam and her fairies (whom Wonder Woman encounters along the way).
Posted by Dave's Not Here Comic Blog at 4:25 AM