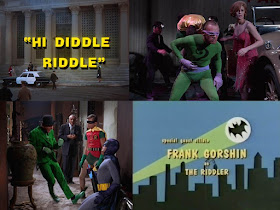 Batman has been around for more than 50 years, but January 12, 1966 was the airing of Batman's first television episode with Adam West as Batman and Burt Ward as Robin, with "Hi Diddle Riddle".

The episode also featured Frank Gorshin as the Riddler (a character who barely had appeared in the comics....but got many more appearances afterwards!), and Jill St. John as Riddler's henchwoman, Molly. 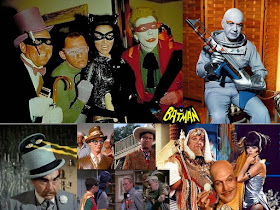 The Batman TV show did introduce more villains from the comics to the viewing public as well, like Penguin, Catwoman, Mr. Freeze, Mad Hatter and the Joker (and go here to take a look at them), as well as creating its own foes, like the Bookworm, Shane, King Tut, Egghead and the Siren, and even borrowed a few rarely used Superman villains, like the Puzzler and the Archer (which the 1950s Adventures of Superman never did...a small kryptonite chink in the otherwise invulnerable armor of George Reeves tenure as Superman). 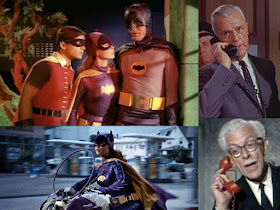 For the first two seasons, episodes ran half an hour, with a cliffhanger at the end of one....to be concluded the next night, same Bat-time, same Bat-Channel, with the series adding Yvonne Craig as Batgirl in the 3rd season as Com. Gordon's daughter, Barbara, who was also  confidant to Bruce Wayne's butler, Alfred Pennyworth (with the show down to only one episode a week...ending in March, 1968 with 120 episodes, plus a movie between the first and second seasons as well!). 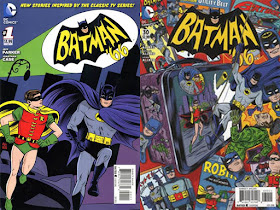 DC Comics has recently been putting out new tales of the 1966 Batman, under the title of Batman '66, starting with Batman '66 #1 (September, 2013) with a story by writer Jeff Parker, and drawn by Jonathan Case.

The series has just concluded with its 30th issue... 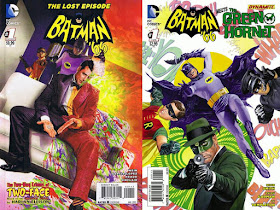 ....but there was also a special Lost Episode issue (featuring Two-Face, based on a story by Harlan Ellison, adapted by writer Len Wein, penciller Jose Luis Garcia-Lopez and inker Joe Prado), as well as a 6 issue mini-series teaming Batman with the Green Hornet, by writers Kevin Smith and Ralph Garman, and art mostly by Ty Templeton, and a two issue mini-series teaming up with The Man From U.N.C.L.E., by Jeff Parker, David Hahn and Karl Kesel, keeping the swinging 1960s alive! 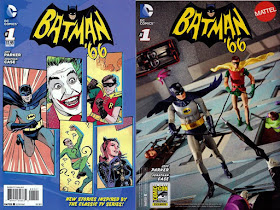