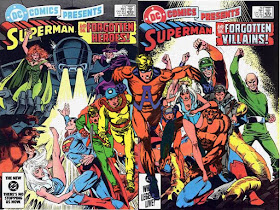 Even more Forgotten Heroes!  This group of neglected 1960s heroes were mostly forgotten, until dusted off by Marv Wolfman as he got ready for the Crisis On Infinite Earths....


....and, like Dolphin, they didn't have too many appearances back in the day, but were gems in the making (well, some more than others...).

So, let's dig into more Silver Age characters of yesteryear.... 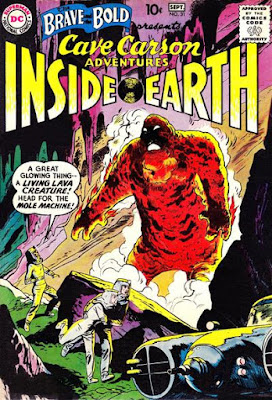 If you talk about digging, Cave Carson is your man.

Calvin "Cave" Carson started his spelunking in Brave and the Bold #31 (August-September, 1960 by France Herron and Bruno Premiani), being contacted to investigate the disappearances of a radio tower and some freight trains and find "The Secret Beneath The Earth".  Cave goes to investigate, while his friends, Bulldozer Smith and Christine Madison, finish work on Cave's Mighty Mole (a machine which would allow the team to tunnel underground).  Getting a message to his team via balloon, Christine and Bulldozer take the Mighty Mole underground to rescue Cave from the magnetic monster responsible for the chaos, starting a series of adventures inside Earth. 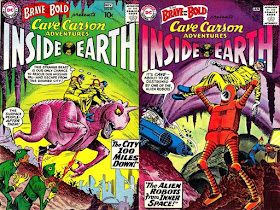 Cave and the crew of the Mighty Mole next find "The City 100 Miles Down" in Brave and the Bold #32 (October-November, 1960, by France Herron and Bernard Baily), finding a whole city and civilization beneath the Earth, planning to invade the surface world.  Cave uses the Mighty Mole to overheat their artificial sun, with Cave, Bulldozer and Christine being the only survivors.  The group next face "The Alien Robots From Inner Space" in Brave and the Bold #33 (December-January, 1960/1961 by France Herron and Bernard Baily), with Cave Carson, Bulldozer Smith and Christine Madison facing robots under the Earth, planning to conquer the Earth, whose plans are thwarted by the crew of the Mighty Mole.... 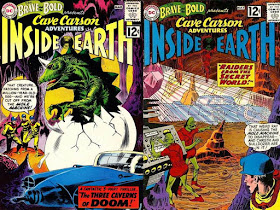 ...the group return, with Brave and the Bold #40 (February-March, 1962 by France Herron and Joe Kubert) to face the "Three Caverns of Doom", facing off against Zenod, an evil collector, bent on finding three magical crystals.  In Brave and the Bold #41 (April-May, 1962 by Jack Miller and Mort Meskin), Cave and crew stop alien thieves (with the help of authorities from their world, after being taken to their world, then returned) in "The Raiders From The Secret World". 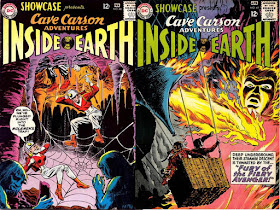 Still digging for a permanent home, Cave and his Mighty Mole crew show up in Showcase #48 (January-February, 1964 by Bob Haney and Lee Elias), facing off against "Killers Of The Dead-End Maze" (a fellow named Emile Basto, a old foe of Cave's).  Cave and crew get new red uniforms in this issue, as well as getting a bit of the team's past (learning of Christine's past boyfriend, Johnny Blake, presumed lost while investigating a French cavern), and that Bulldozer has a pet lemur, named Lena, and that he had a history as an ex-con.  This story continues in part in Showcase #49 (March-April, 1964, by Bob Haney and Lee Elias), with the Mighty Mole team going to face a fire giant in South America, with Christine being kidnapped by it, and Cave and Bulldozer finding the missing Johnny Blake, Bulldozer finding an ancient sceptre which releases a fire bird, then rescuing Christine and Johnny while destroying the fire bird! 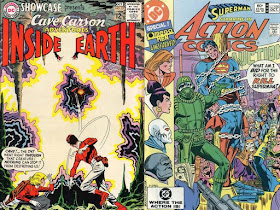 The team have one final adventure, in Showcase #52 (September-October, 1964 by Bob Haney and Lee Elias), as they nearly become "Prisoners Of The Lost World", while testing a saucer-shaped aircraft, they are taken to an underground city, where a scientist named Dr. Damion wants Cave to take over protection of the city from an energy creature, all while Johnny is turned to stone and the rest of the team faces the energy creature, with Cave defeating it, Bulldozer deciding to stay, and Johnny being restored as Cave and Christine leave the city (Bulldozer decides to leave with them as well).

The team had been fracturing, and when we next see Cave Carson, in Action Comics #536 (October, 1982, by Marv Wolfman and Joe Staton), Cave has become a recluse, grown a beard, and doesn't want to use the Mighty Mole to help people (but Lois Lane and the Omega Men convince him to help Superman against the Mole). 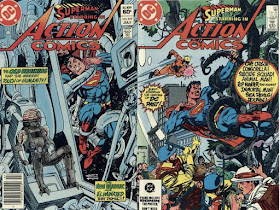 Cave then shows up in Action Comics #545 (July, 1983), meeting with Rip Hunter and Dane Dorrance, and then in Action Comics #552 (February, 1984), wherein he explains a little of the break up of the Mighty Mole team, and prepares to help Superman and other heroes in a battle against Superman. 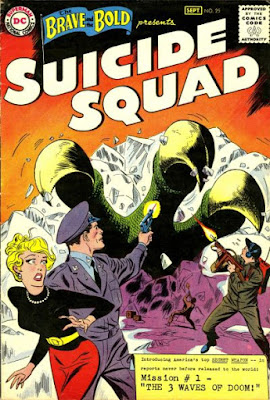 The next recruit for the Forgotten Heroes comes from the government, specifically Task Force X, also known as the Suicide Squad.  The team of troubleshooters first recorded mission happened in "The Three Waves of Doom" in Brave and the Bold #25 (August-September, 1959, by Robert Kanigher and Ross Andru), with Air Force Colonel Rick Flag leading space medicine specialist Karin Grace, and civilian scientists Jess Bright and Dr. Hugh Evans against a red wave of fire sweeping across the sea.  While the team stopped the red wave, they then unleashed a mutant creature, which they then lured to a space rocket, and left the mutant in space.  The team would have more menaces to fight (both inside and outside the team, as these heroes who had survived life threatening menaces alone came together again to defeat the odd....all before the Justice League of America had formed!). 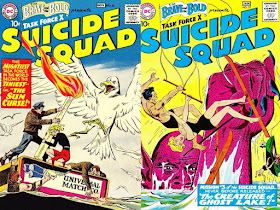 Next up for the government team, was "The Sun Curse" in Brave and the Bold #26 (October-November, 1959 by Robert Kanigher and Ross Andru), where the team returns to Earth and is shrunk to small size, and fights enemy agents to prevent an atomic attack (and to get home and returned to normal size!).  Then, when they get home, the team also faces the "Serpent in the Subway" as they take a quick vacation in Paris (also a story by Kanigher and Andru).  The team then faces "The Creature Of Ghost Lake" in Brave and the Bold #27 (December-January, 1959/1960, by Robert Kanigher and Ross Andru), which came from experiments of a Professor Duane and his Formula X. 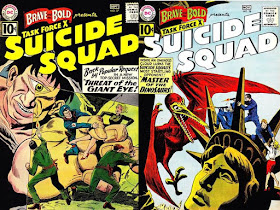 The team took a little hiatus, until Brave and the Bold #37 (August-September, 1961), with two adventures, first facing the "Raid of the Dinosaurs" (by Robert Kanigher and Ross Andru), with Karin drawing pictures of dinosaurs destroying the Earth and the rest of the team working to stop it from really happening, and then Task Force X facing the "Threat Of The Giant Eye" (also by Kanigher and Andru), with the team fighting the giant cyclops, Polyphemus.  The team also faced two menaces in their next issue, Brave and the Bold #38 (October-November, 1961, both by Kanigher and Andru), first with the Suicide Squad facing a pterodactyl (and chasing it to find a hidden alien spaceship in a cloud above New York City) and defeating the aliens in the "Master Of The Dinosaurs", then facing the invading alien Mirage Master, and repelling his attack. 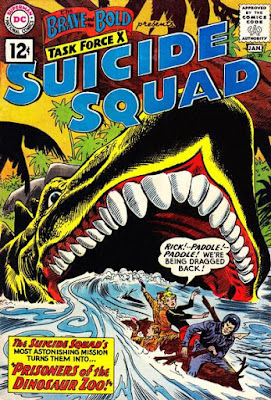 The last of the original Suicide Squad's death-defying adventures happen when the team finds themselves "Prisoners of The Dinosaur Zoo" in Brave and the Bold #39 (December-January, 1961/1962, both by Robert Kanigher and Ross Andru), thinking they were transported back to the time of the dinosaurs (but really were on a spaceship that had been on Earth collecting specimens millions of years ago)...

...and then facing a "Rain of Fire", with a sculptor who uses a golden metal to turn people into statues. 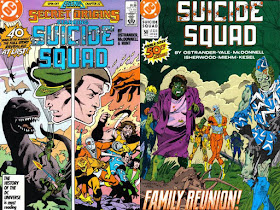 Then the team wasn't seen again until their final mission, facing off against yetis to find a golden pyramid (a mission that did not go well for Karin, Jess or Hugh), as related in Action Comics #552 (February, 1984), which led to Rick joining the Forgotten Heroes for a time, and later in Secret Origins #14 (May, 1987)  and in Suicide Squad #50 (February, 1991)  (with the more familiar idea of Task Force X using super-villains as their forces, thanks to Amanda Waller; but more on that later....). 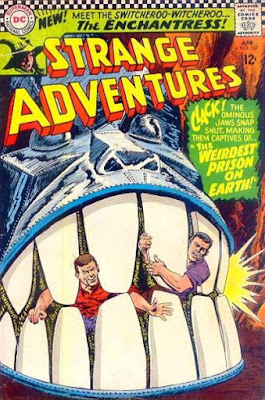 June Moone started as a heroine back in Strange Adventures #187 (April, 1966) as "The Enchantress of Terror Castle" (by Bob Haney and Howard Purcell), changing after her boyfriend, importer Alan Dale, brought her to a costume party at Terror Castle...


...and June encountered the Dzamor, who told her to state the name, "Enchantress", which allowed June to become the supernatural super-heroine and defeat the evil of the castle (and then change back to June, to leave the party with Alan, who had no idea of the Enchantress' true identity...). 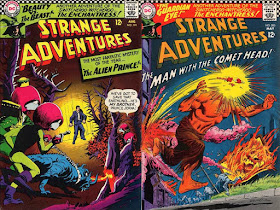 June returned in Strange Adventures #191 (August, 1966 by Bob Haney and Howard Purcell) pulling her switcheroo-witcheroo by becoming Enchantress and saving Alan Dale and the Earth from an underground monster that emerges from the Earth by tricking it to board a space probe into space, then while at a museum with Alan, June becomes the Enchantress to stop thieves from stealing "The Guardian Eye" in Strange Adventures #200 (May, 1967, by Bob Haney and Howard Purcell).  Sadly, even with all this attention, the Enchantress couldn't even get a full cover in her three original solo appearances! 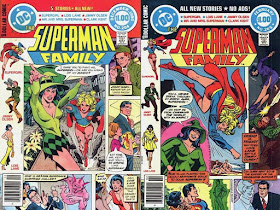 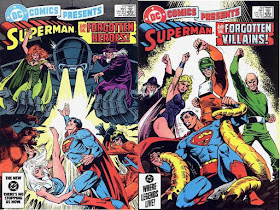 After facing Supergirl, the Enchantress returned again, but this time with help.  The Enchantress wasn't a hero at the time the Forgotten Heroes were formed, so she instead changed her look a little, and formed her own "Triad Of Terror", with magic users Kraklow and Yggardis in DC Comics Presents #77 and #78 (January and February, 1985 by Marv Wolfman and Curt Swan), and along with Rip Hunter's foe, worked with Sea Devils' villain, Mr. Poseidon (formerly known as Mr. Neptune), Challengers of the Unknown foe ULTIVAC, the Faceless Hunter From Saturn and obscure Superman/Batman foe, the Atom-Master (and don't worry more info on the Forgotten Villains will not be forgotten to come soon...). 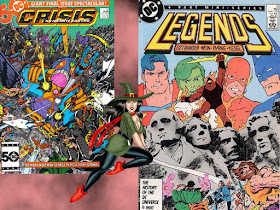 The Enchantress returned to her usual outfit, and worked with DC magic users like the Wizard in Crisis On Infinite Earths #12 (March, 1986, by Marv Wolfman and George Perez, and also featured many of the Forgotten Heroes, like Rip Hunter and Dolphin, along with Animal Man and more in space fighting Brainiac), and was soon after recruited by Amanda Waller to work for her Task Force X along side Deadshot, Captain Boomerang and Bronze Tiger during the Legends six issue mini-series of 1986 and 1987 (making her and Rick Flag teammates, after being on opposite sides before....).

Still have a few more Forgotten Heroes to cover, so don't forget to come back!
Dave's Not Here Comic Blog at 3:43 AM
Share