Flash Facts Flash vs. the Rogues 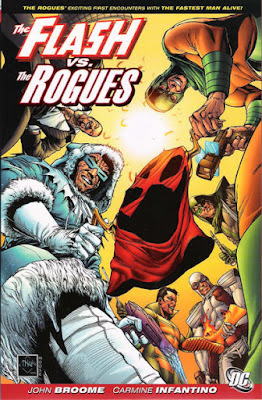 One of the things the Flash was most known for in the Silver Age was his Rogue's Gallery.


You can search far and wide looking for their first appearances....


...or just get the Flash vs. The Rogues tradepaperback from 2009, under this cover by Ethan Van Scriver, with a collection of the first appearances of Flash's most important non-speedster foes.


Collected here are the first appearances of.... 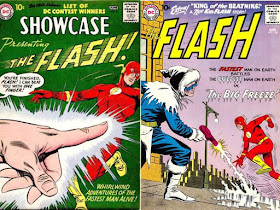 Leonard Snart was a cheap crook who stumbled onto a gold gun in the Flash's second appearance, in Showcase #8 (May-June, 1957, by John Broome and Carmine Infantino), with "The Coldest Man On Earth".

Captain Cold would be a driving force in Flash's life...and appeared next in Flash #114 (August, 1960, NOT in the trade, but mentioned so a cover with Captain Cold could be shown!). 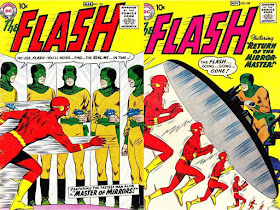 Sam Scudder used his knowledge of mirrors first to rob a bank, and then to become the Mirror Master, starting with Flash #105 (February-March, 1959) with "The Master of Mirrors" by John Broome and Carmine Infantino.

Mirror Master was the first villain readers saw in the newly revived Flash comic....and he quickly returned in Flash #109 (October-November, 1959), also not in the trade, but a cool cover, nonetheless! 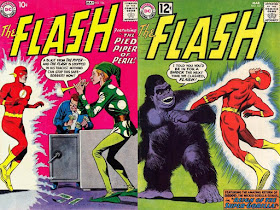 Grodd was never really a rogue, but his first appearance from Flash #106 (April-May, 1959) by John Broome and Carmine Infantino in the "Menace of the Super-Gorilla" made it into this collection (though not the next two parts of the Grodd trilogy, where Flash continued to face the gorilla, meet Solovar and find Gorilla City). 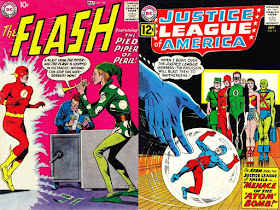 Hartley Rathaway hadn't been happy in live, so he took his knowledge of sound and made himself into the Pied Piper to take on the Flash in "The Pied Piper of Peril" from Flash #106 (April-May, 1959, by John Broome and Carmine Infantino), even making the cover of his first appearance!

Pied Piper even branched out in his second story (not in the trade), being recruited by Mr. Memory as the Flash foe in Justice League of America #14 (September, 1962) along with Green Lantern foe Hector Hammond, Aquaman villain Sea-Thief, Wonder Woman rogue Angle Man, Green Arrow evil-doer Dr. Davis and (behind the scenes) the Joker (to capture Batman), all while dealing with the Atom joining the JLA; though all these villains didn't make the cover! 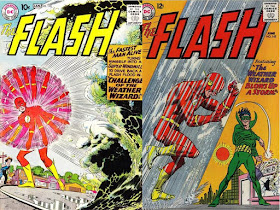 Mark Mardon was an escaped criminal who got his weather wand when he found his brother, Clyde, (noted scientist working on weather control) dead in his lab, and used that technology to create his weather wand to give himself control of the weather...and menace the Flash starting with "The Challenge Of The Weather Wizard" in Flash #110 (December-January, 1959/1960) by John Broome and Carmine Infantino. 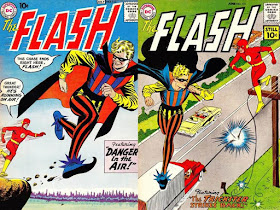 Jesse James was a messed up kid, being part of a circus aerialists (but was also afraid of heights).  Jesse came up with some shoes that allowed him to walk on the air, becoming a "Danger In The Air" in Flash #113 (June-July, 1960, by John Broome and Carmine Infantino).

Trickster quickly strikes back after his heist of a plane in mid-air, quickly coming back to play new pranks on the Flash in Flash #121 (June, 1961) in a story not in the collection. 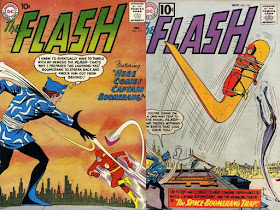 This boomerang quickly returned, facing the Flash and the Elongated Man in Flash #124 (November, 1961), in his second appearance (which isn't in the trade). 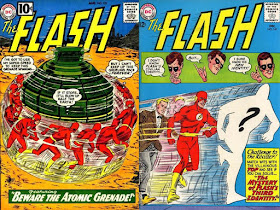 Roscoe Dillon was a small time crook getting nowhere, until he came up with a spinning motif based on his love of tops as a child.  This led him into a spin-up with the Flash in Flash #122 (August, 1961 by John Broome and Carmine Infantino) with "Beware The Atomic Grenade" (a much larger threat than a spinning top, indeed!).

The Top spun onto his first cover on his own with Flash #141 (December, 1963), where we also met Peter Gambi, a tailor to super-villains in a stylish story (not in the collection)! 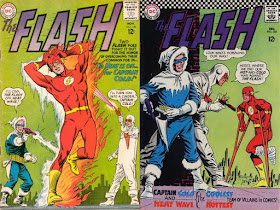 Mick Rory was a kid who liked fire.  So much so, that he ended up as the super-villain, Heat Wave, and ended up making "The Heat Is On For Captain Cold" in Flash #140 (November, 1963 by John Broome and Carmine Infantino), which started a competition between the two temperature opposite villains (starting a rivalry between them...and leading to a gathering of more Flash foes as well....).

Heat Wave's second appearance with with all the Rogues, but his appearance after that was in Flash #166 (December, 1966), still facing off against Captain Cold (but not seen in this trade), and Mick continued to be a thread to the Flash, eventually taking him on on his own! 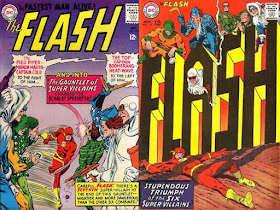 ....and the team-up of the Flash's Rogue's Gallery!  Captain Cold, Mirror Master, Pied Piper, Captain Boomerang, the Top and Heat Wave made live hard for the Flash in Flash #155 (September, 1965, by John Broome and Carmine Infantino), making Barry run "The Gauntlet of Super-Villains"...and there was a surprise villain the Rogues faced as well (who tried to make a monkey out of the villains).