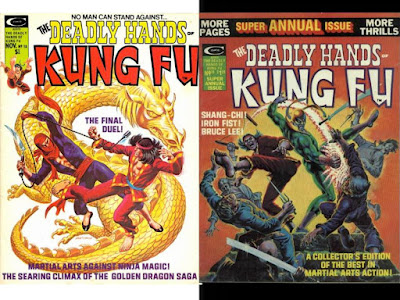 Nick Cardy was an artist known mostly for his work on Teen Titans, Aquaman, and Bat Lash, as well as all over DC Comics covers of the 1970s.

But, did you know he did a few covers for Marvel back in those days?

Here are the two painted covers he did featuring Shang-Chi for Marvel's Deadly Hands Of Kung Fu magazine! 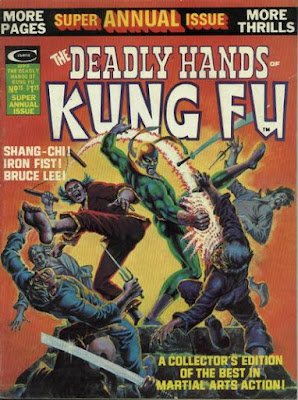 As a "Super Annual Issue", this Summer of 1975 magazine issue featured reprints of Shang-Chi's second and fifth appearances (from Special Marvel Edition #16 and Master Of Kung Fu #19), Iron Fist's second appearance (Marvel Premiere #16), and a feature on Bruce Lee's life...
...but no team up of the characters as the cover suggests. 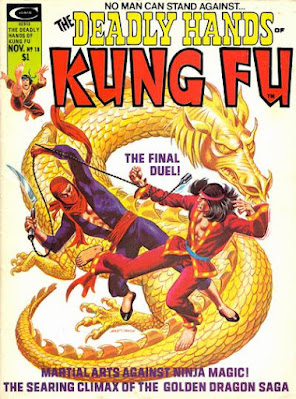 This November 1975 issue had two stories, with the first featuring Shang-Chi fighting the Shadow-Thief (no relation to the DC character), and ending his Golden Dragon Saga by Doug Moench and Rudy Nebres...
...while the second story, by Bill Mantlo, Pat Broderick and Terry Austin, featured a team up of Iron Fist and the Sons of the Tiger, fighting a villain called Snake-Eyes (no relation to the G.I. Joe character....), as well as a little feature on the Yakusa.

Makes you wish DC had jumped into the magazine market to get some painted covers of DC characters from Nick Cardy! 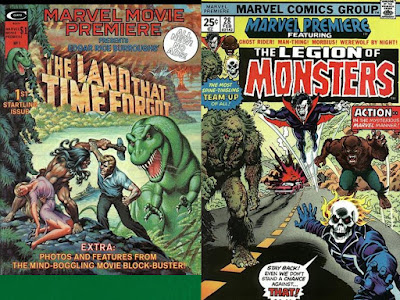 He also did a few other covers for Marvel, one for Marvel Movie Premiere #1 (September, 1975) featuring an adaptation of The Land That Time Forgot, and Marvel Premiere #28 (February, 1976), featuring Marvel's horror based characters, including the Man-Thing, Ghost Rider, Morbius and the Werewolf by Night!

Posted by Dave's Not Here Comic Blog at 2:55 AM