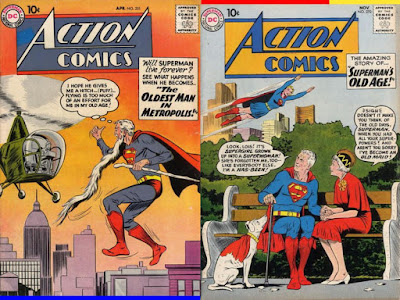 ....maybe he's getting a little old and has to think about retirement!

Let's take a look at a pair of stories that hint at what happens when Superman reaches retirement age!

The Oldest Man In Metropolis 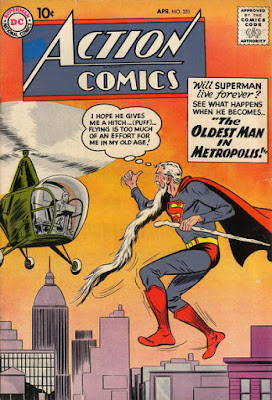 First up, a time when Superman was the oldest man in Metropolis from Action Comics #251 (April, 1959) by Robert Bernstein and Al Plastino, under a cover by Curt Swan and Stan Kaye.

Clark Kent is helping out Professor Vance, by drinking a new vitamin formula he has developed to increase a person's lifespan, but, instead grows old (and it affects Superman because Vance used Kryptonite in his formula!).  Superman has a problem going into action (more because it would reveal his identity as Clark, with his white hair and beard), so has to face criminals Captain Cutlass and the Clock, among other threats, under disguises that he can pull off!

This story is reprinted in Superman Annual #3 of 1961 (and, is the issue that predates Supergirl's introduction!).

The Old Man Of Metropolis 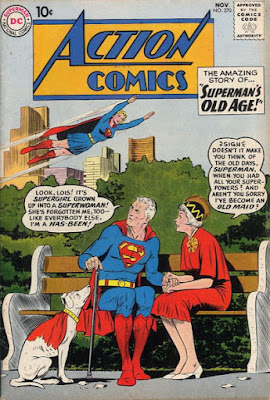 Action Comics #270 (November, 1960) by Otto Binder, Curt Swan and John Forte (with cover by Swan and Kaye), gives readers another look at an older Superman.

This time around, Clark is assigned to write a story about Midvale Orphanage (where Linda "Supergirl" Lee currently lives).  Linda gives him a story she wrote about the future, which Clark takes home to read, as he falls asleep for the night, he dreams of that future.  Superman has reached an old age, with Supergirl growing up to be Superwoman and replacing him as Metropolis' hero; Perry has passed away, but Jimmy Olsen is the current editor of the Daily Planet; Lana Lang has married a wealthy man; Luthor has cured cancer and Lois has become an old maid waiting for Superman.  Superman even gets arrested, trying to dispose of Kryptonite (which no longer affects him, as he has lost his powers).  Superman ends up in jail with Bizarro until Lois bails him out, and he decides to spend the rest of his remaining days with her.....as Clark wakes up.   The next day at the Planet, Clark decides to be nicer to Lois.... 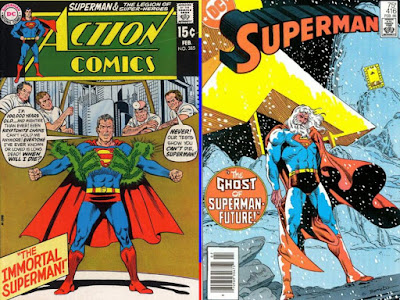 This story was reprinted, with many others, in DC's first 80-Page Giant of 1964!

These weren't the only times Superman grew old, but, no matter what, he kept in Action!