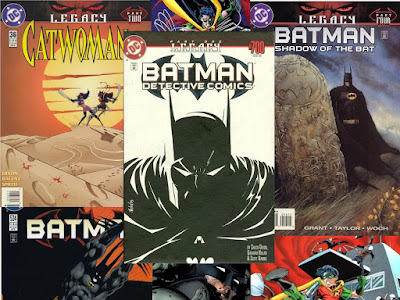 When last we met (other than a brief interlude), Batman, Robin and Nightwing were about to encounter the villain of the piece in the desert....meanwhile, captive below ground, Catwoman herself found out one of the secrets of this dig as well.

No time to wait, Bat-fans, let's just dive right into the action that starts in Detective Comics #700 (August, 1996). 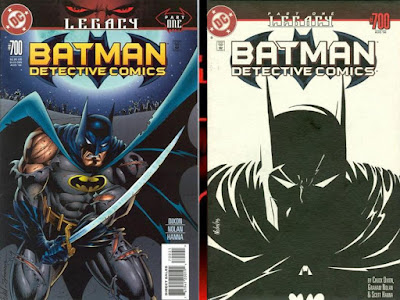 The anniversary issue, by Chuck Dixon, Graham Nolan and Scott Hanna, had Batman in one normal cover, then a special edition, with Batman in on an envelope...and, when you opened the envelope, you saw the cover which revealed one of the secret villains of the issue.

Have the clues from the last column pointed you to who it is yet? 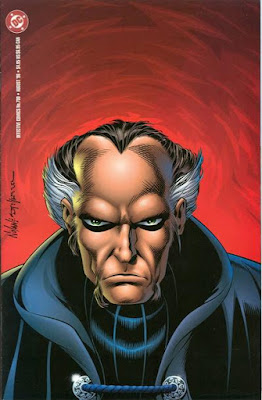 Well, here is the answer.  The mystery villain is Ra's Al Ghul, with the story of the "Progeny Of The Demon" to kick off Batman: Legacy.

Ra's has a new plan to rid the world of its human population, using the wheel to get the secret to a new contagion, as well as having a new man he deems worthy to marry his daughter and take his legacy.  Batman, Robin and Nightwing plan to stop him, with Batman and Robin getting trapped down the mineshaft as Ra's prepares to destroy the wheel to prevent anyone from getting the cure.

Nightwing briefly faces Ra's as Batman and Robin struggle to get free from the now flooding mine.  Getting free forces Ra's and Talia to flee (planning on releasing their new plague on the New World), but also revealing the identity of the man Ra's intends to wed his daughter...Bane, the man who broke Batman's back!

Meanwhile, Catwoman, still trapped in her cell, prepares to deal with the water rapidly filling that room... 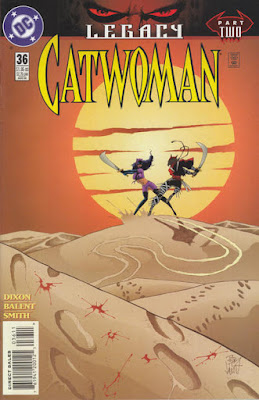 In a story by Chuck Dixon, Jim Balent and Bob Smith, Catwoman faces the unappealing death by drowning in a desert in "The Best Of Enemies".

Freeing herself and Brother Umberto, Selina also realizes she must free her foe, Hellhound, as it will take all three of them to escape the flooding complex.  Alfred brings a jet to pick up Batman, Robin and Nightwing, who get a chance to repair their wounds, then the team gets in touch with Oracle, who spells out where they need to go next to stop Ra's, with Robin and the injured Nightwing headed to Paris, Batman to Edinburgh.

After a battle in the desert with Hellhound, Catwoman gets revenge on the Collector for involving her in this mess. 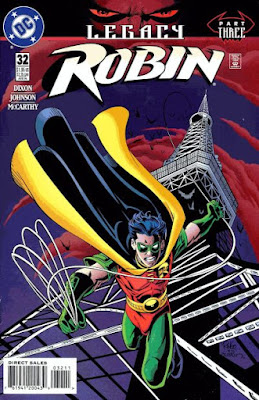 "Born With Teeth" is part three, by Chuck Dixon, Staz Johnson and Ray McCarthy, with Robin and Nightwing in Paris.

Tim and Dick look for where Ra's men might deploy the newest contagion, with Tim meeting up with Shen Chi (an oriental master Robin trained with when last in Paris) as well as Henri Ducard (who had trained young Bruce Wayne as recounted in Detective Comics #598 to #600).  Nightwing, Robin and Ducard stop Ra's men at the Louvre, with Ducard dispatching them fatally, angering Robin.

Tim and Dick take a plane back to Gotham, with Tim worrying that everyone, himself included, may be dying from the clench virus.

Batman: Shadow of the Bat 54 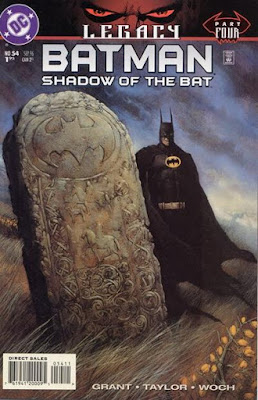 Batman's detour to Edinburgh shows him "The Power Of The Picts" in the Legacy chapter by Alan Grant, Dave Taylor and Stan Woch.

Bruce Wayne explores an ancient castle, finding out a little of the history of the area, before having to become Batman.

As Batman, he faces the Taskers, a family that Ra's has inspired to use the virus to destroy the people around the castle, stopping them and Ra's plan here.

In talking with Robin and Nightwing via radio, as his time was successful, they tell him that Oracle found another destination of Ra's, which he will investigate....Calcutta. 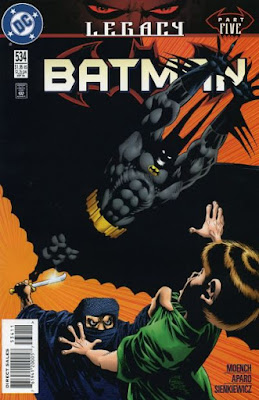 Doug Moench, Jim Aparo and Bill Sienkiewicz bring the next chapter of Legacy, with "A Wound On The Heart Of Heaven".

Batman ends up working with Lady Shiva (the world's master assassin, whom Batman has crossed paths with before).

The pair must stop the agents of Ra's from releasing the virus into the water supply which the town bathes in.

Along the way, they meet one of the starving urchins of the city, which was a good thing for the world, as he ends up preventing the virus canister from releasing, but at the cost of his own life. 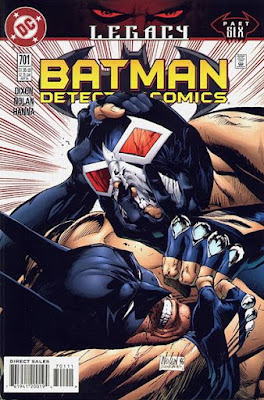 With Oracle directing Nightwing, Robin and Huntress against other minions of Ra's in an effort to keep Gotham safe, Batman deals with Bane in his triumphant return to Gotham.

Bane and Batman battle under the docks, with Batman renewing his fortitude for his cause, recalling how he lost his parents, to give him the strength to beat Bane, though the currents sweep Bane away from Batman.

Hearing of Bane's defeat, Ra's cancels his engagement to Talia, with her suggesting "The Detective" (Batman) as a replacement, to which, Ra's disagrees. 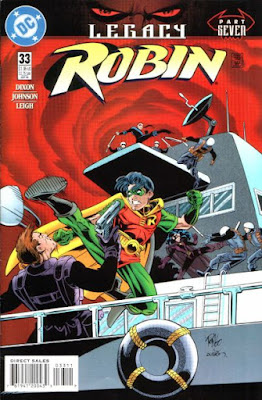 The end of Legacy comes with "Riptide" by Chuck Dixon, Staz Johnson and Rob Leigh.

Nightwing, Huntress and Robin don diving gear to sneak aboard Ra's yacht, as directed by Oracle.  The team split up, with Nightwing and Huntress facing Ra's and Talia, while Robin gets a computer model of the Wheel of Plagues to Oracle, so she can find a cure, all while Batman fights the current to stay alive (as Bane eludes his grasp). The proteges of Batman are successful, detonating Ra's yacht as well (though Ra's and Talia must have escaped the explosion), all while a new mystery surfaces as bodies wash up from Bludhaven, to be discovered by Harvey Bullock  and Renee Montoya (which will lead Nightwing to that city....and his own ongoing title by Chuck Dixon). 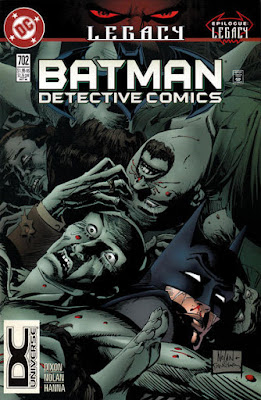 Legacy gets an epilogue by Chuck Dixon, Graham Nolan and Scott Hanna, with "Second Chances".

In this case, Bruce Wayne saves Gotham, as Wayne Pharmaceuticals produces the cure to the clench virus, James Gordon reconciles with his estranged wife (and fellow police officer) Sarah Essen.  Bruce also sees the death toll that the virus has taken on a larger scale in the morgue, as does Robin, trying his best to save just one more life, with Alfred reminding the dynamic duo to remember their successes as well as their failures.


This tale also puts a wrap on Batman title crossovers for a time (though it tied together epics like Knightfall and Contagion), even though the next issue of Detective ties in with the DC crossover, the Final Night; all in all, an entertaining and thoughtful look at the career of the Batman for one of his anniversaries....recalling the past, while looking to the future! 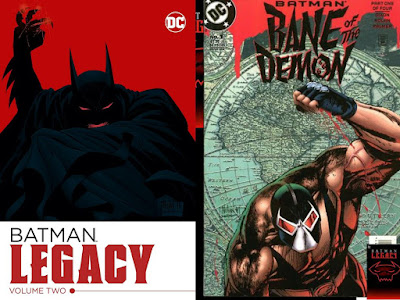 These tales, except for Detective Comics #700 are all in Batman: The Legacy Part 2, which also includes the four part mini-series that came out later, Batman: Bane Of The Demon, by Dixon, Nolan and Tom Palmer, detailing how Bane came to work for Ra's (and become a temporary beloved of Talia).  All these tales also showcase the true legacy of Batman....Nightwing, Robin, Huntress and Oracle.