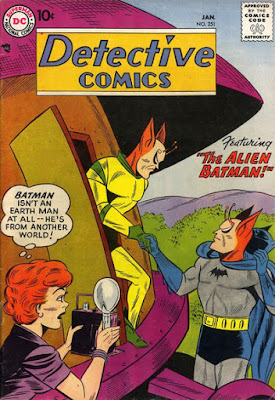 Vicki Vale takes a picture....proving Batman is really an alien from outer space?

That's the basis for the story of "The Alien Batman" in Detective Comics #251 (January, 1958) by Edmond Hamilton, Sheldon Moldoff and Charles Paris.

At this time in Batman's history, it was indeed possible, but...in this case there is a bit of trickery going on.  Brand Ballard and Keener come up with a plot to shake Gotham's faith in the caped crusader, and make make up to trick Vicki into reporting this as truth, so that the police and citizens (and even his closest friends) doubt Batman.  Batman catches the criminals, and Gotham's faith in their hero is restored!