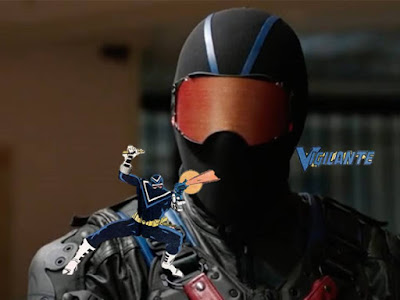 Adrian Chase was a tough District Attorney in New York City, working with Robin of the Teen Titans to take down the crime families (running from New Teen Titans #23, #26, #27, #29, #30, #33 and #34 of 1982 and 1983 by Marv Wolfman and George Perez)...until the crime families hit back, killing Adrian's family and wounding him, leading Chase to take up the masked identity of the Vigilante... 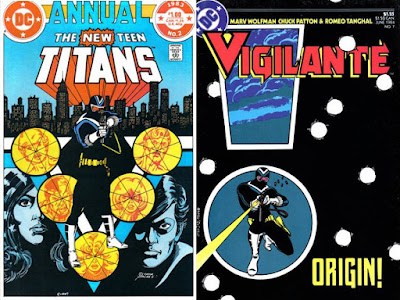 It was in New Teen Titans Annual #2 (1983) by Marv Wolfman and George Perez that Adrian became the Vigilante after his family was killed (and Adrian had been declared dead as well).  Still, he recovered, and with help, took out the man who killed his family as the Vigilante.  In Vigilante #7 (June, 1984) by Marv Wolfman, Chuck Patton and Mike DeCarlo, it was explained how Adrian was trained by the spirits of the dead and given a regenerative healing factor, which allowed him to recover and mete out justice, with his infra-red goggles, guns and other weapons. 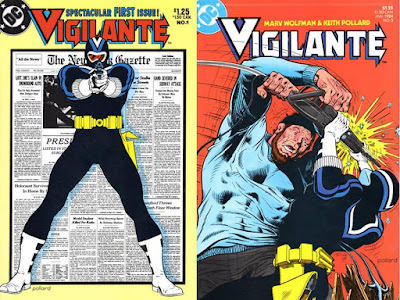 Vigilante #1 (November, 1983) introduced Adrian's helpers, J.J. Davis and Theresa Gomez, by Marv Wolfman and Keith Pollard, with a more adult approach to handling violent crime. Vigilante #2 (January, 1984) by Wolfman, Pollard and Pablo Marcos, saw Adrian doubting himself already, going after Leonard Kord for assault against a nun, but after a savage battle with the man, finding out he was not the perpetrator. 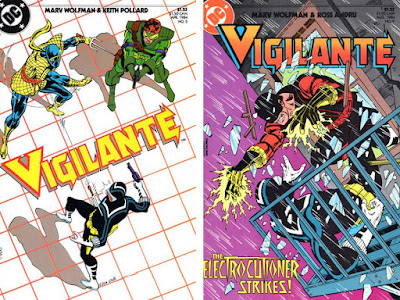 Adrian did face foes who weren't in need of understanding, such as the hitman duo of Sabre and Cannon introduced in Vigilante #5 (April, 1984) by Marv Wolfman, Keith Pollard and Romeo Tanghal, as well as the Electrocutioner, a one-time foe of Batman's, who started to menace Adrian as of Vigilante #8 (July, 1984) by Marv Wolfman, Ross Andru and Mike DeCarlo (and these villains would return to vex Vigilante multiple times). 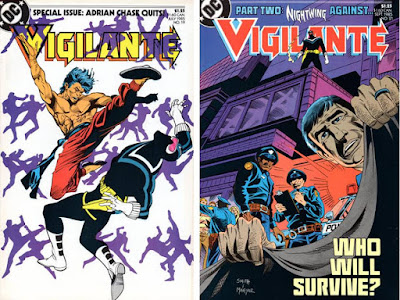 Adrian's heart became heavy because of the severity of the crime he faced (as well as losses along the way), and with Vigilante #19 (July, 1985 by Marv Wolfman, Paul Kupperberg, Denys Cowyn and Rick Magyar), gave up being Vigilante (as he was also being appointed a judge at the time). Someone else took over the costume, prompting Nightwing (formerly Robin) to confront Adrian, and with Vigilante #21 (September, 1985 by Paul Kupperberg, Tod Smith and Rick Magyar), Adrian promises to find the more violent Vigilante and stop him.  Adrian does, and another man takes over being Vigilante for a while 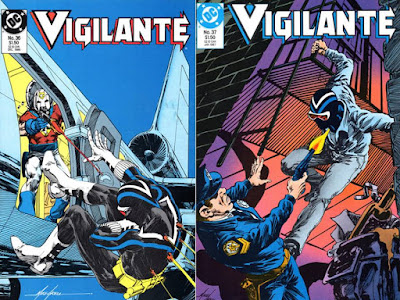 But that doesn't last, as unstable hero Peacemaker takes out the newest Vigilante in Vigilante #36 (December, 1986 by Paul Kupperberg, Denys Cowan and Kyle Baker), with Adrian returning to combat his killer, starting in Vigilante #37 (January, 1987) by Paul Kupperberg, Tod Smith and Rick Magyar, beginning to work with now ex-NYPD officer Harry Stein and Valentina Volstok (Negative Woman of the Doom Patrol). 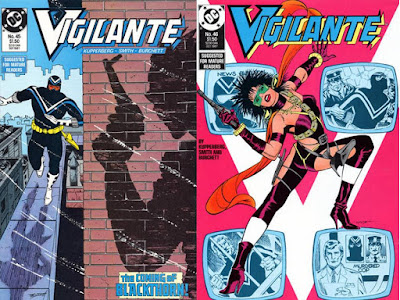 Adrian continues his battles against violent criminals and attacking terrorists, and even meets assassin, Black Thorn in Vigilante #45 (September, 1987) by Paul Kupperberg, Tod Smith and Rick Burchett, and the two become very close, continuing that relationship in the next issue, Vigilante #46 (October, 1987) also by Kupperberg, Smith and Burchett.  Harry Stein gets recruited into a secret government organization by Valentina Volstok, with Harvey Bullock of Gotham Police Department also getting involved. 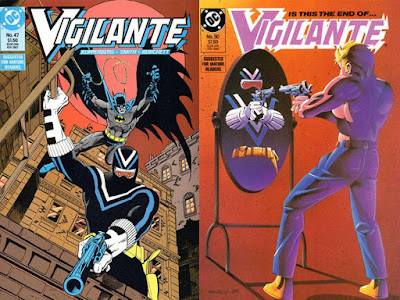 The trail of the terrorists lead to Gotham, with Batman getting involved and not liking the Vigilante in Vigilante #47 (November, 1987 by Kupperberg, Smith and Burchett), but Harvey gets Batman on board for now, and then due to falling into the water, everyone thinks Vigilante is dead.  Harvey is recruited for the government organization as well, and Black Thorn returns briefly as well, until Adrian realizes he might be more of menace than those he fights, and takes himself out of the game for good by giving himself final, fatal justice in Vigilante #50 (February, 1988 by Paul Kupperberg, Steve Erwin and Jack Torrance). 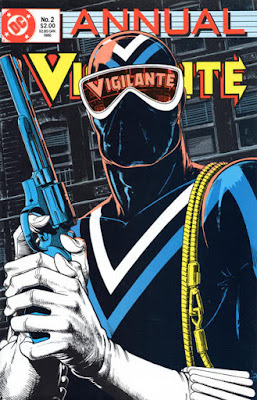 A quick highlight of the life of Adrian Chase and his version of the Vigilante (showing, though, that he never met Green Arrow in the comics).


Though only lasting 50 issues and 2 Annuals, Vigilante changed the mindset of comics in general at the time...


...making one wonder what a true hero was, what he could and couldn't do, and truth of the toll taken on the hero for being a hero, as well as the difference between the law and justice, and justice and revenge.

Posted by Dave's Not Here Comic Blog at 4:59 AM