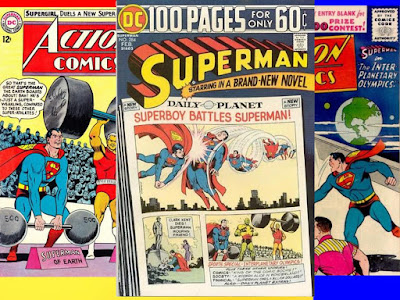 You'd figure Superman would do well in the Olympics, with all of his otherworldly powers...but you'd be wrong!

A little extra this time around, starting with a reprint of a Superman story with him in the Olympics from Superman #284 (February, 1975) with a Nick Cardy cover, and seeing where that takes us! 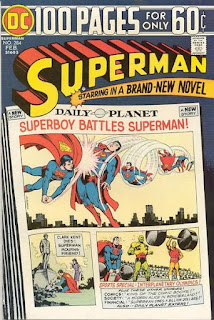 In the new story in this issue, Clark returns to Smallville to meet with Chief Parker and deal with his old homestead...

...and comes faces to face with his past....and battles Superboy, in a story about "The Secret Guardian Of Smallville!" by Cary Bates, Curt Swan and Bob Oksner.

This issue also has puzzles, a feature on people who broke into the Fortress of Solitude, and a few reprints.... 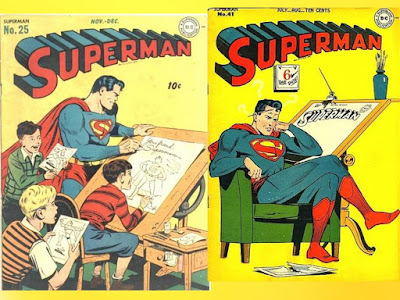 But, the selling point of the issue was the main reprint....from.... 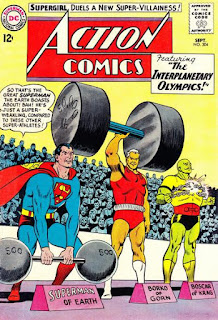 "The Interplanetary Olympics" by Leo Dorfman, Curt Swan and George Klein from September, 1963, has Superman competing in an intergalactic game, and as shown, being outclassed by Borko of Gorn and Boscar of Krag!

Superman and Lana Lang were taken there by force, but Superman's powers seems to fail him (a deliberate ploy by the man of steel, to prevent the criminals in charge from syphoning his powers to use in their nefarious scheme).

But, if this seem oddly familiar....(but not reprinted in the Superman issue....). 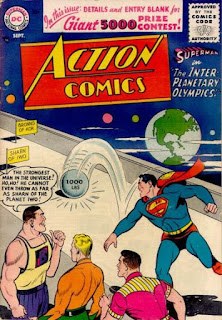 "The Interplanetary Olympics" by Ed Hanilton and Al Plastino from September, 1956, has Superman competing in an intergalactic game, and as shown, being outclassed by Bronno of Kor and Sharn of Iwo!
Here, Superman was unable to perform due to Kyrptonite being used in the construction of the stadium!
Just when you thought you'd seen every Olympic controversy!
Posted by Dave's Not Here Comic Blog at 1:44 PM