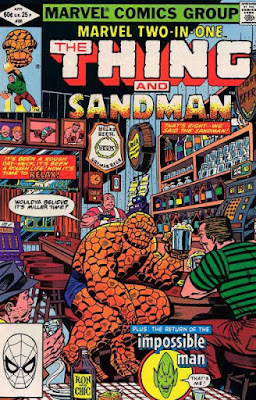 Hoist a cold one, not unlike the Thing, as today is International Beer Day!

Here, in Marvel Two-In-One #86 (April, 1982; by Tom DeFalco, Ron Wilson and Chic Stone), instead of fighting, the Thing and Sandman discuss the mistakes Sandman had in his life that led to his being a super-villain....all over a cold one at the local pub.

It's not all fights, as people can sit down and hash one out over a beer!
Posted by Dave's Not Here Comic Blog at 5:00 AM