The Earliest Adventures Of The Super Sons Of Superman And Batman 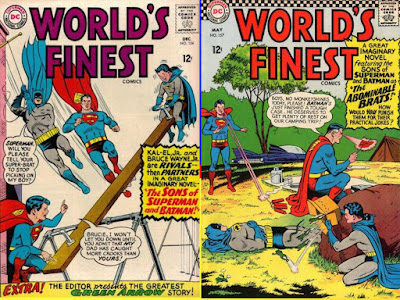 Long before Jonathan Kent and Damian Wayne, or even the creations of Bob Haney in the 1970s, Superman and Batman had adventures with their super sons, Superman Jr. and Batman Jr. in World's Finest Comics.

Here are their two adventures from so long ago!

The Sons Of Superman And Batman 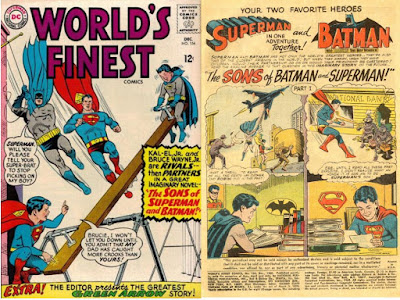 First up, from World's Finest Comics #154 (December, 1965) by Edmond Hamilton, Curt Swan and George Klein (and cover by Swan/Klein), the beginnings of the Super-Sons! 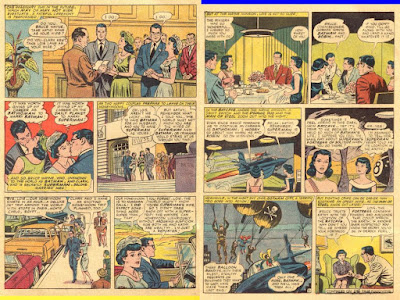 The two couples went on separate honeymoons (starting a riff between Lois and Kathy, as the Waynes could do a world tour, but the Kents just did Niagra Falls because Clark had to appear to live on a reporter's salary.  Time progressed, and each couple had a son, Kal-El Jr. for Clark/Lois and Bruce Wayne Jr. for Bruce/Kathy.

The boys played together, yet young Kal would bully young Bruce with his super powers.  This set Kathy against Lois, and could have separated the Superman and Batman partnership as well. 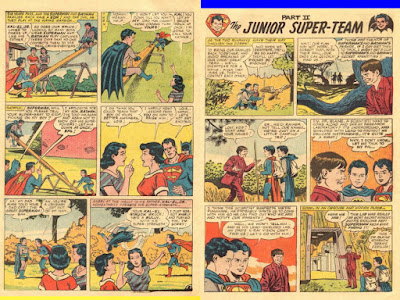 The boys figured this out, and set out, figuring their absence would bring their parents together.  Along the way, the runaways were found by recent escapee, Nappy Klains (the Napolean of Crime, a foe of Superman and Batman that young Bruce had read about).  The villain tricked the kids to going with him to his lair, capturing them to use against his foes, their parents.  The Waynes and Kents realized their boys were missing, and all went looking for them....as Nappy hatched his plan, of disguising himself as Bruce Jr. (Nappy was a midget, which also helped his escape).  Trapped in his lair, the two boys worked together to get free, then thwarted Nappy's plans, reuniting with their parents and ending the feud. 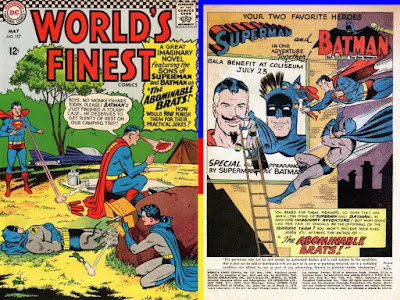 Continuing the saga of the Super-Sons, but a few years down the line for the characters, is World's Finest Comics #157 (May, 1966) by Edmond Hamilton, Curt Swan, George Klein and Sheldon Moldoff (with cover by Swan/Klein).

It is years later, as seen by the grey in Clark, Bruce and Kathy's hair, and the sons have gotten older. Bruce Wayne Jr. seems to be becoming quite a problem, but thankfully, Kal-El Jr is there to save him from crashing his flying car.  Hearing about his later, Batman confronted his son, who denied it.  Conferring with Superman, Batman asked him to watch his son, but Superman first found his own son performing misdeeds, which Kal Jr denied when confronted. 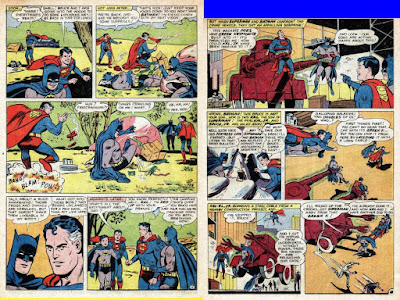 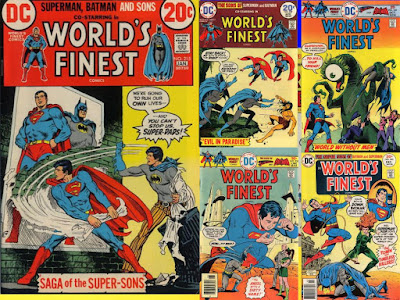 Back then, these were Imaginary Stories (stories with familiar characters not set in current continuity), but the Crisis Compendium placed these adventures on Earth-154 (and they were different from the adventures of Bob Haney's Super Sons, who were in issues of World's Finest Comics in the 200s, and existed on Earth-215....differentiated by Superman not having gray hair when the boys were teenagers, and the Super Sons adventures taking place in what looked like the 1970s). 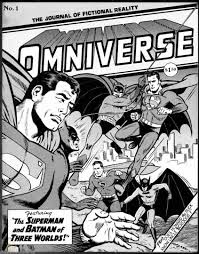 Had things gone differently, those two earlier issues could have been on "Earth-E", as in "E. Nelson Bridwell" or "Extraneous", as postulated by Mark Gruenwald, on Omniverse 1 (1977), a fanzine.


Earth-E would be a place where adventures of Superman and Batman in the late 1940s and 1950s took place (basically from after the tales of the Justice Society in All-Star Comics #57  in 1951 to just before the Justice League in Brave and the Bold #28 in 1960). 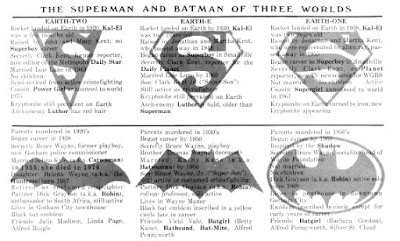 This would take into account slow changes that happened with Superman and Batman (Superboy facing an adult Lex Luthor, Superman working for the Daily Star and then Planet, Batman's odder tales and even working with Batwoman), and be a bridge between Earth-1 and Earth-2.  But, Mark went to work for Marvel, so it never happened...and, like the early stories is only imaginary.....

Posted by Dave's Not Here Comic Blog at 3:14 PM