The Adventures Of The Legion Youth 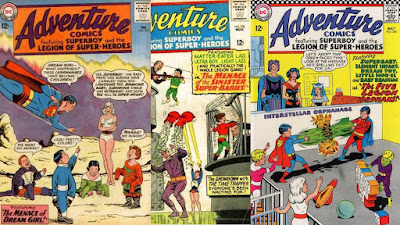 Much has been made about the Legion of Super-Heroes, but one of the defining traits of the group of future heroes is their youth...

Here are those adventures!

The Menace of Dream Girl 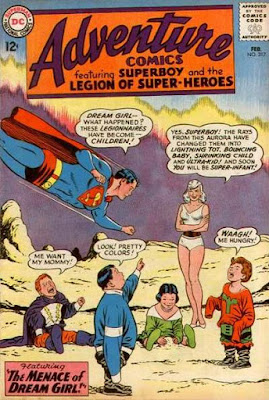 First up is Adventure Comics #317 (February, 1964) by Edmond Hamilton and John Forte, which is the first appearance of Dream Girl, as well as the first mention of the Time Trapper (who hides beyond his Iron Curtain of Time, which doesn't even allow Superboy and Mon-El to break through).

Dream Girl applies for Legion membership, showcasing her powers of accurately dreaming the future (only a few days in advance), and, due to her beauty, quickly gets all the male Legionnaires on her side (earning the ire of the female Legionnaires).   Dream Girl is accepted as a member, and studies the Legion constitution....but for what seems a nefarious purpose.  First, sending Lightning Lass on a mission that removes her lightning powers (which is a removable offense of the Legion of SUPER-Heroes). 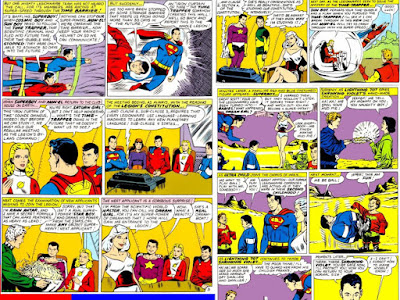 Then, coming up with reasons to remove other members from the team, including bringing Lightning Lad, Bouncing Boy, Shrinking Violet and Ultra Boy on a mission which turns them into babies!  Dream Girl confides in Superboy and Star Boy, her plan was to save Legion members that were to die in a space crash, but it was only robot duplicates that were destroyed.

Fearing the ill will of the team, Dream Girl leaves the team (keeping track of Star Boy, who would later become involved with the seer from Naltor), everyone is reinstated to the Legion, with Lightning Lass now having new powers to reduce the mass of anything (as opposed to lightning powers).  The battle with Time Trapper continues on and off for many issues after this....until....

The Menace Of The Super-Babies 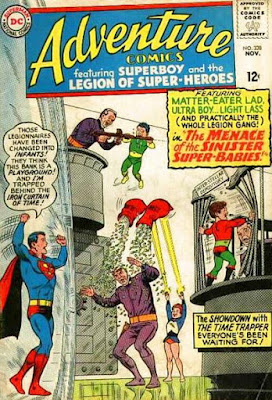 The final appearance of Time Trapper in Adventure Comics was in Adventure Comics #338 (November, 1965) by Jerry Siegel and John Forte, where the Time Trapper sends his agent, Glorith of Baaldur, back from his headquarters at the End of Time, to face the Legion, supplying her with a device to breach the Iron Curtain, to go along with her hourglass, which reduces anyone in age to protoplasm.

Saturn Girl gathers Legion members to prepare them for a final battle with the Time Trapper, as Saturn Girl has been contacted by Glorith, who meets with the Legion at an abandoned amusement park in the 30th Century.   Glorith shows the team her ring which can penetrate the Iron Curtain, and gets them to touch the hourglass, but, thanks to chemical mist from a nearby fountain, the Legion members present (Saturn Girl, Chameleon Boy, Invisible Kid, Ultra Boy, Matter-Eater Lad, Element Lad and Light Lass) into infants! 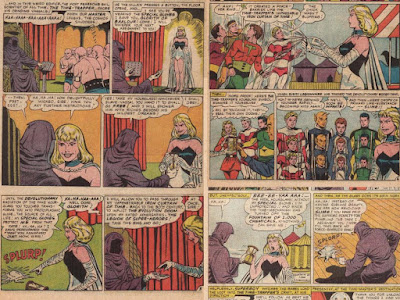 The Time Trapper, observing Glorith's failure, comes back in time himself, exposing her to the hourglass (without chemical protection, reverting her to protoplasmic slime), then, convinces the unknowing infant Legion to commit crimes for him.

Brainiac 5 and Superboy follow the Trapper and the youth, eventually convincing him to restore the ages of the afflicted Legion members (and thanks to a mischievous baby Star Boy and the wisdom of Brainiac 5) are able to trap him behind his own Iron Curtain (for a time). 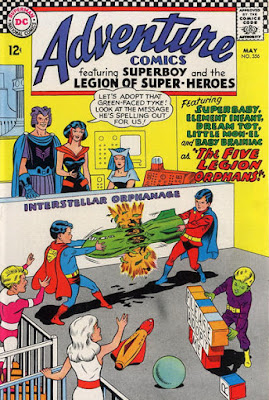 The last of the youthful adventures of the Legion is Adventure Comics #356 (May, 1967) by E. Nelson Bridwell, Curt Swan and George Klein, and this story started on a happier day....for some members of the Legion.

It was Parent's Day, with the various members of the Legion celebrating with their parents.  But, that excluded the orphans....Superboy, Brainiac 5, Mon-El, Element Lad and Dream Girl.  The five, responding to an alarm on the planet Zinth, try to retrieve a crystal from a pond, but all five regress in age after exposure.  They end up in an orphanage, and are all adopted by parents from the planet Baskh.  Brainiac 5, whose intellect is unaffected by the de-aging, works on a cure for himself and his friends, eventually coming up with one. 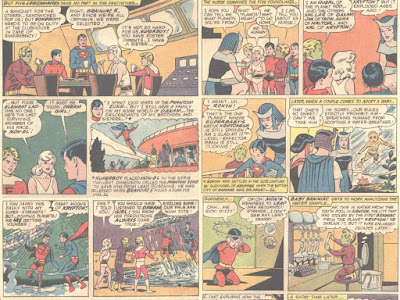 After being cured, the Legion find that the people of Baskh lost their kids after a radioactive meteor passed through their solar system, and came up with the idea to regress and adopt the Legion members.  They regretted their actions, but Dream Girl gave them hope....she dreamed that they would soon have children again, due to the fallout fading from their planet. 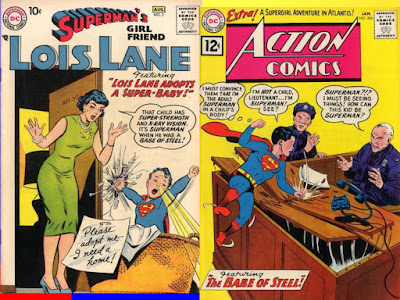 Now, it is true that Superman had many other adventures where he was turned into a Superbaby, but....

...those are adventures for another time!