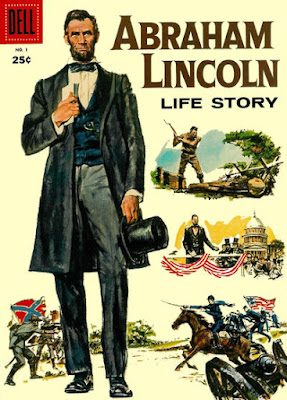 Remembering 16th President Abraham Lincoln on his birthday (February 12, 1809) with the Dell Comic, Abraham Lincoln Life Story from March, 1958, with a cover attributed to either John or Sal Buscema.

The comic by Gaylord DuBois and Alberto Giolotti, covered Lincoln's life, from his boyhood in a log cabin, to his wild life in the backwoods of Kentucky and Indiana, moving up to be a lawyer then elected official in Illinois, becoming President on March 4, 1861, dealing with the Civil War and freeing the slaves, then his untimely assassination by Confederate supporter, John Wilkes Booth on April 15, 1865.


"And in the end, it's not the years in your life that count. It's the life in your years."
Posted by Dave's Not Here Comic Blog at 4:30 AM