Luthor vs. Batman and Superman Part 3 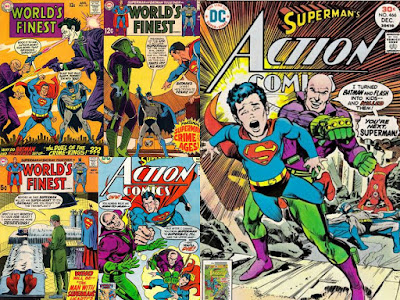 
Here's the last of their World's Finest battles....and a few extra! 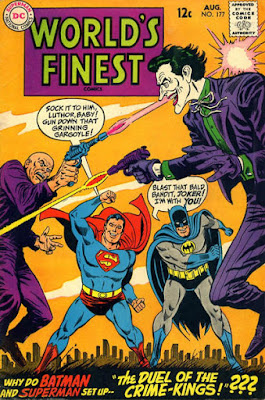 Luthor hadn't been fairing well in battles with Superman and Batman, so, why not take on the Joker instead?


World's Finest Comics #177 (August, 1968) sees "The Duel Of The Crime Kings" by Jim Shooter, Curt Swan and Mike Esposito, with Luthor and Joker using a time machine to recruit famous minds like Benedict Arnold, Baron Von Munchhausen and Leonardo da Vinci to plan crimes, with the double crossing Benedict Arnold setting Luthor and Joker against each other, leaving the World's Finest heroes to clean up the mess!

This tale has only been reprinted in black and white, in Showcase Presents: World's Finest Volume 4 of 2013. 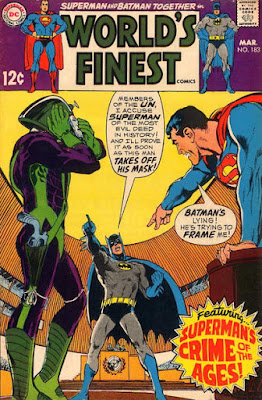 Under this odd cover by Neal Adams is the story of "Superman's Crime Of The Ages" from World's Finest Comics #183 (March, 1969) by Leo Dorfman, Ross Andru and Mike Esposito.

This story has Superman being accused by the Time Patrol from 4069, coming back from a time where Superman (under Red Kryptonite influence) had sent a bomb to their time and devolved them into ape men.  Batman went back with them to check it out and found proof...but we find out it was proof of Superman's innocence, and a plot by Luthor and Brainiac, using the Planet of the Apes, no less!  Holy remake, Batman!

This tale has only been reprinted in black and white, in Showcase Presents: World's Finest Volume 4 of 2013. 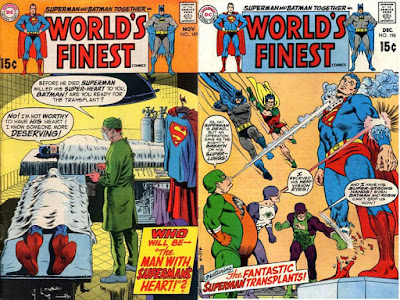 Next up is a two-part story from World's Finest Comics #189 & #190 (November and December, 1969) by Cary Bates, Ross Andru and Mike Esposito (with covers by Curt Swan and Murphy Anderson), with "The Man With Superman's Heart" and "The Final Revenge Of Luthor"...

...all dealing with the death of Superman!!! 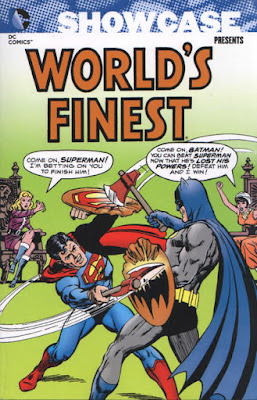 Luthor shows up after Superman is seen falling dead from the skies.  Batman, Robin, Supergirl and the rest of the Justice League mourn Superman, yet harvest his organs (with Batman keeping Superman's heart), and Luthor steals all the other organs for his own dastardly purposes.  Luthor puts the organs into members of the Big Four Syndicate, who go on a super powered rampage, but Luthor also figures out they weren't Superman's organs, realizing that Superman must still be alive.  Superman, Batman and Robin then stop the four, as well as Luthor.

Both of these tales have only been reprinted in black and white, in Showcase Presents: World's Finest Volume 4 of 2013, and is the last of Luthor's appearances in the original run of World's Finest Comics (other than in a Super-Sons saga, with Luthor's daugher). 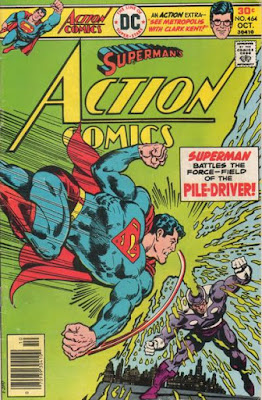 Last, but not least is Action Comics #465 & #466 (November and December, 1976), but the story actually starts in Action Comics #464 (October, 1976) with Superman facing Pile-Driver in "Superman, I'm Going To Re-Run Your Life" by Cary Bates, Curt Swan and Tex Blaisdell (and a cover by Bob Oksner).

Superman faces the new foe of Pile-Driver, and after quickly beating him comes across a kid Flash and a young Batman....but, they seem to be his friends, now younger! 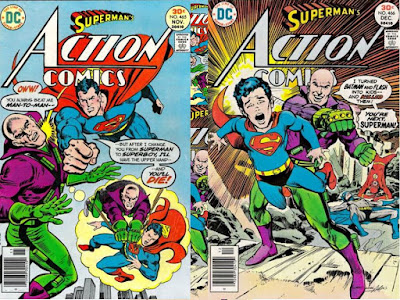 The story picks Action Comics #465 (November, 1976) with "Think Young And Die" also by Bates, Swan and Blaisdell, with Superman testing the kid Flash and young Batman, and thinking they are his friends (and getting the warning Luthor plans to do this to Superman soon).  Superman does revert to a younger version of himself (while at a party as Clark Kent), so, after covering his identity, takes off to find Luthor, and face him with the help of his friends.

This issue also has a back-up story on "The Sporting Life of Steve Lombard.". 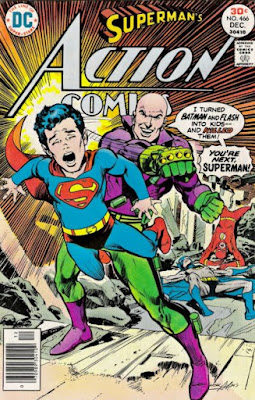 The main action finally finishes in Action Comics #466 (December, 1976, also by Bates, Swan and Blaisdell, under a Neal Adams cover), with the lengthy title of "You Can Take The Man Out Of Super, But You Can't Take The Super Out Of The Boy" (and this tale takes the whole issue....mostly to fit that title!).  The suddenly SuperBOY, kid Flash and young Batman face Luthor, with it going badly and Luthor killing Flash and Batman....or did he?  Superman figures it out, and goes back to the JLA Satellite to talk about the case with Flash and Batman, ending this lengthy story (which has yet to be collected). 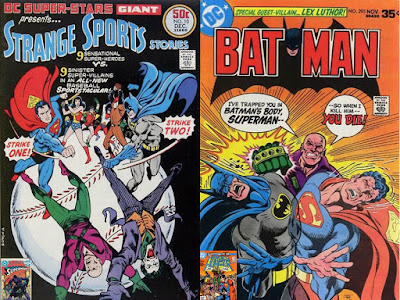 But there's still more Luthor beyond World's Finest Comics, like DC Super Stars #10, Batman #293 and Superman Annual #9, and even more to hunger for!